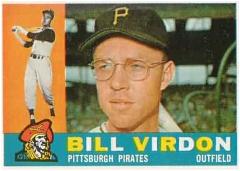 Centerfielder Bill Virdon won the 1955 National League Rookie of the Year Award with the St. Louis Cardinals and spent more than a decade as regular with the Pittsburgh Pirates before managing several big league clubs.

Virdon was known for the glasses he wore, and for a tremendous catch early in the 1960 World Series.

Originally signed by the New York Yankees in 1950, Virdon was traded to the Cardinals as part of the deal that brought Enos Slaughter to New York prior to the 1954 season. That year, he went on to hit 22 home runs for the Rochester Red Wings while leading the International League with a .333 average. In 1955, he joined the Cardinals, and after hitting .281 with 17 homers, was named the NL Rookie of the Year.

After a slow start to the 1956 campaign, Virdon was dealt to the Pirates in May. After the trade, he hit .334 in 133 games for Pittsburgh, ending the year with a .319 overall mark. A well-regarded fielder, he won a Gold Glove in 1962, and that same summer, he led the NL with 10 triples.

Following the 1965 season, Virdon was released by the Pirates and joined the New York Mets organization as a minor league manager. He led the Williamsport Mets in 1966 and the Jacksonville Suns in 1967 before rejoining the Pittsburgh Pirates as a player-coach in 1968. He became a full-time coach for the club the following season.

In 1972, Virdon became the Pirates manager, and he led the team to an NL East division title, losing the NLCS to the Cincinnati Reds. However, star Roberto Clemente was killed in a plane crash during the offseason, and the club played sub-.500 ball the following year, costing Virdon his job late in the season. Yankees owner George Steinbrenner hired him to manage his team in 1974, and under his leadership, New York improved from fourth to second place. Yet once again, he did not last long as skipper. During his second season at the helm, he was fired by Steinbrenner and replaced by Billy Martin in the first of his many stints as Yankees manager.

Less than a month after being fired by the Yankees, Virdon was hired by the Houston Astros to replace Preston Gomez as manager. He led the team to third-place finishes in his first two full seasons there, in 1976 and 1977 and after slipping to fifth in 1978, they improved to second in 1979. He then led the Astros to their first-ever NL West title in 1980, winning a one-game playoff over the Los Angeles Dodgers before falling to the Philadelphia Phillies in the NLCS in five games. In the following strike-shortened season, the team captured the second half title but again fell in the playoffs in five games, this time to the Dodgers. However, when the Astros fell to fifth place in 1982, Virdon was let go late in the season.

Virdon became manager of the Montreal Expos in 1983, but after a year and a half at the helm when he failed to take the team over the hump to a division title, he was replaced by Jim Fanning late in 1984. He eventually returned to the Pirates as a coach in 1986 and spent time as the organization's roving outfield instructor. He later was an Astros coach in 1997 and a member of the Pirates staff again in 2001 and 2002.