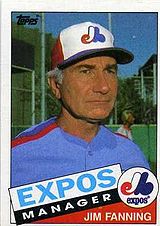 After his playing career ended Jim Fanning was a minor league manager and an Atlanta Braves scout (1963-1964) before becoming an assistant GM for the Braves. He went on to become the first General Manager of the expansion Montreal Expos. He held that position until 1976 and went on to serve two stints as the club's manager.

While born in Chicago, IL, his family moved to a small town in Iowa when Jim was a child, and he grew up a St. Louis Cardinals fan. After graduating from high school he served with the Army in Germany during World War II then earned a degree in physical education from Buena Vista College in Storm Lake, IA. He played catcher on various semi-pro teams during those years, and in 1949 was signed by the Chicago Cubs and scout Joe Kernan. He played for eight different minor league clubs in three years from 1950 to 1952 before he had a solid season for the Cedar Rapids Indians of the Three-I League in 1953, hitting .272 with 26 doubles and 16 homers in 120 games. He followed that by hitting .304 for the Beaumont Exporters of the Texas League, earning a late-season promotion to Chicago. He hit .184 in 11 games for the Cubs in 1954 in his first experience of the big leagues. He was a Texas League All-Star that season, even though he did not begin playing until June because he had a job teaching history at a high school in Stanhope, IA.

Fanning got a couple more short looks with the Cubs in 1955 and 1956, going 0 for 10 and 1 for 4 respectively, before making the team out of spring training in 1957 as a back-up to starting catcher Cal Neeman along with veteran Charlie Silvera, who had been stuck behind Yogi Berra with the New York Yankees for a number of years. He played 47 games and went 16 for 89 (.180) at the plate, his batting average being brought significantly down by his inability to get much done as a pinch-hitter, as he went 0 for 12 in the role. He ended his major league career with a .170 batting average, which wasn't enough to stick even though he was a fine defensive catcher with a strong arm. No longer in the Cubs' plans in 1958, he accepted a job as a player-manager with the Tulsa Oilers in mid-year, beginning the transition to what would be his real career in baseball. He had started that season as a player coach with the Fort Worth Cats, the Cubs' own affiliate in the Texas League, before moving to the Philadelphia Phillies organization to replace the fired Al Widmar. His next managerial assignment came under similar circumstances the next year, 1959, this time after the unaffiliated Dallas Rangers of the American Association fired manager Fred Martin in July. He had again begun the season as a player-coach with Fort Worth before moving on. He was fired after the Rangers finished last in 1960, but he landed on his feet when he was hired by the Milwaukee Braves to manage their Eau Claire Bears farm team in the Northern League. He managed three years for the Braves before moving to a front office position, leaving in 1968 to join the Major League Scouting Bureau. His boss in Milwaukee and in the Commissioner's office, which oversaw the scouting bureau, had been John McHale, who was named the first President of the expansion Montreal Expos. He brought Fanning over to Montreal to be the team's first General Manager in 1969.

Immediately after being hired, Fanning pulled off a blockbuster trade, sending veterans Jesus Alou and Donn Clendenon, both obtained by the Expos in the expansion draft, to the Houston Astros in return for young star Rusty Staub. The Expos had targeted Staub to be the new face of the team and built their marketing around him, so they were quite dismayed when the trade almost unraveled because Clendenon refused to report to Houston. New Commissioner Bowie Kuhn, who owed McHale a favor, did not void the trade, as would normally have been the case, but instead urged the two teams to work things out. Everything was in limbo during spring training, until days before Opening Day, the Expos managed to convince Clendenon to sign with them instead of the Astros and offered two promising young pitchers as compensation to Houston, Jack Billingham and Skip Guinn. For their part, the Astros sold three pitchers they had no use for to the Expos, Leo Marentette, Howie Reed and Steve Shea, to give the team a bit of organizational depth and the convoluted deal was finally official. Another major trade came just before the 1972 season, when he traded Staub, who had indeed become the Expos' biggest star in the interim, to the New York Mets in return for three youngsters who couldn't find starting jobs in New York, Tim Foli, Mike Jorgensen and Ken Singleton. The trade was very unpopular at first, but as the three players acquired all became productive starters with the Expos, fans eventually forgave them for trading away their idol. Another big deal following the 1973 season did not go so well, when he sent relief pitcher Mike Marshall to the Los Angeles Dodgers for CF Willie Davis. Marshall was the winner of the 1974 National League Cy Young Award while Davis only stayed one season in Montreal. But this was nothing compared to the fiasco that followed the 1974 season. That December, he sent Singleton and P Mike Torrez to the Baltimore Orioles for P Dave McNally, OF Rich Coggins and minor league P Bill Kirkpatrick. Torrez and Singleton became stars in the AL, playing until the mid-1980s, while McNally and Coggins were both basically out of baseball by the end of June 1975 and Kirkpatrick never made the majors. That trade really hurt Fanning, as he was supposed to be acquiring young talent, not giving it away. Back-to-back last-place finishes in 1975 and 1976 sealed his fate, the latter especially because his choice of manager to replace Gene Mauch, the inexperienced karl Kuehl, turned out to be in way over his head as a major league manager. Fanning was kicked upstairs, concentrating on player development while Charlie Fox took over as GM. He did a very good job in his new functions, however, turning an indifferent farm system into one of the best ones in the major leagues and completely restoring his reputation as a sound baseball man.

His first stint as a major league manager started when he took over for Dick Williams late in the 1981 season and led the team to the only postseason appearance in its history. He hadn't managed at any level or put on a uniform for nearly 20 years when he got the job, but he knew the Expos' roster intimately, as it was largely made up of home-grown stars whom he had helped develop over the past few seasons. The Expos finished hafl a game ahead of the St. Louis Cardinals to win the second-half title in that strike-shortened season, then defeated the Philadelphia Phillies in the Division Series. However, they lost the NLCS in five games to the Los Angeles Dodgers on Rick Monday's 9th-inning home run off Steve Rogers. Fanning took a lot of criticism for using Rogers in an unfamiliar role as a reliever that day, but in truth, the Expos' ace was his best option in what was clearly a do-or-die situation. He returned for the 1982 season, but the Expos under-performed, particularly because he was unable to identify a productive second baseman, and after the season, he stepped aside to make way for Bill Virdon. When Virdon failed to bring the Expos to the postseason, Fanning succeeded him late in 1984, finishing out the year before Buck Rodgers was hired to manage the team with a rebuilding mandate in 1985.

After his managerial forays, Fanning remained with the Expos organization for over 20 years. He was also the Expos' radio commentator from 1993 to 2000. Fanning then moved to the Toronto Blue Jays as the "Ambassador, Amateur Baseball Canada". He acquired Canadian citizenship in 2012, at the age of 84. His wife Marie, who he only married in the mid-1980s after having been single all those years, is Canadian, as are his two children, Cynthia and Frank, by virtue of being born in the country where Fanning has lived most of his adult life.

Fanning was inducted into the Canadian Baseball Hall of Fame in 2000, in recognition of his long career with the Expos. He passed away at his home in London, ON in April of 2015 at the age of 87.