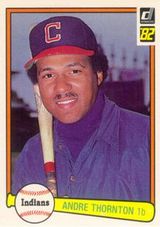 Andre Thornton hit 253 home runs in the major leagues during a 14-year career, mostly with the Cleveland Indians. He had a notable year early in his career with the Chicago Cubs in 1975, leading the team with 18 home runs even though he only had 372 at-bats. His .516 slugging percentage was much higher than the team average of .368.

Thornton is the brother-in-law of the late Pat Kelly.

Andre was inducted into the Indians Hall of Fame on August 11, 2007, with former pitchers Jim Bagby, Sr., Mike Garcia and Charles Nagy.