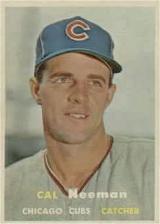 Catcher Cal Neeman was signed as an amateur free agent by the New York Yankees before the 1949 season out of Illinois Wesleyan University, where he also played basketball. The Yankees organization assigned Cal to the Joplin Miners of the Class C Western Association, where he spent both the 1949 and 1950 seasons. Cal hit .292 for the Miners in 95 games in 1950 to help them win the pennant (with help from Mickey Mantle). Neeman was then called up by the United States military to serve during the Korean War, returning in time for the 1953 season.

Neeman spent the next four seasons in the minors with his best year coming in 1955 when he caught 122 games and hit .294 for the Birmingham Barons of the Southern Association. In 1956 he was with the AAA Richmond Virginians and also the AAA Denver Bears and played well. On December 3, 1956 he was drafted by the Chicago Cubs from the Yankees in the 1956 Rule V Draft.

Neeman jumped right in and became the first-string receiver at Wrigley Field as a rookie in 1957, hitting .257 with 10 home runs in 122 games. A solid receiver, Cal was with the Cubs until he was traded to the Philadelphia Phillies along with Tony Taylor for Ed Bouchee and Don Cardwell on May 13, 1960.

Neeman's game started to tail off and the 33-year-old catcher was passed along to the Pittsburgh Pirates in 1962 and he finished out his major league career in the American League with the Cleveland Indians and Washington Senators in 1963.

After baseball, Neeman worked as a railroad switchman and ran a health food store before returning to school and earning a degree in education and becoming a school-teacher and a coach. He later spent several years in the school supplies business before retiring to a lake community near St. Louis, MO.