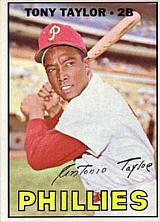 Tony Taylor, who played nineteen years in the major leagues, was an immensely popular player in Philadelphia, and spent most of his career as a member of the Philadelphia Phillies.

Although he won no Gold Gloves, Tony was a decent enough fielder who showed good range in his younger years at second base, and while he was not a great hitter, he usually had a respectable batting average along with some stolen bases. On June 21, 1964, he made a spectacular diving play to save Jim Bunning's perfect game against the New York Mets at Shea Stadium. His best year with the bat was 1970, at age 34, when he posted a line of .301/.374/.462 (the team hit .238). He had six separate years where he stole at least 20 bases.

Taylor was born in Cuba the same year as Pedro Ramos and grew up on a sugar plantation. He signed with the New York Giants around the age of 18, and came up to the majors originally with the 1958 Chicago Cubs, where he was the regular second baseman and double play partner of Ernie Banks, who won the MVP award that year. Tony stayed with the Cubs for two years and part of a third before being traded to the Phillies in 1960. He stayed with the Phillies through all of the 1960s until the middle of 1971, when he was traded to the Detroit Tigers. He helped the Tigers win a division title in 1972 when he hit .303. After the 1973 season he returned to the Phillies to close his career from 1974 to 1976 as a pinch hitter and backup infielder. Prior to every plate appearance, Taylor always crossed himself.

With 2,195 lifetime games, Tony ranks high on the list of major leaguers who played the most games without ever appearing in a World Series. Taylor and his teammate, Johnny Callison, are believed to have been the first players to have been the victims of six no-hitters. These were all against the Phillies between 1960 and 1969. Bert Campaneris tied this apparent record in 1977. His 15 seasons with the Phillies are the third most in franchise history; he was also the franchise's all-time leader for games played at second base until passed by Chase Utley.

His first baseball card appearance was in the 1958 Topps set. He passed away in July 2020 at age 84 from complications from a stroke he had suffered the previous August following an appearance at a Phillies alumni event at Citizens Bank Park.