Note: This page discusses 1960s and 1970s infielder Ron Clark. For the college coach of the same name, click here. 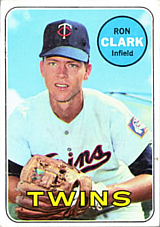 "Another infielder got racked up during the game. Ron Clark collided with George Scott of the Red Sox and had thirteen stitches taken in his lip. Ron's a tough, gutty little ballplayer. He has a baby face, two tattoos on his arm (one says "Mother" and the other is of a black panther), smokes big cigars -- and when he has thirteen stitches in his lip he drinks beer out of the side of his mouth." - Jim Bouton, Ball Four

Ron Clark cracked a single in his lone at bat in 1966 to finish his first (abbreviated, 5 game) season at 1.000, but his bat would never be so robust again. In 530 total at bats, most of which came with the Minnesota Twins, he hit just .189 with 5 home runs. He also appeared briefly for four other teams, including the infamous Seattle Pilots of 1969.

Following his playing career, Ron was a minor league manager and a big league coach with the Chicago White Sox from 1988 to 1990, the Seattle Mariners in 1991, and the Cleveland Indians in 1992 and 1993.

" I faced Reggie Jackson, Roberto Clemente, Pete Rose, Al Kaline, Willie Mays, Brooks Robinson, Frank Robinson, Frank Howard, and Carl Yastrzemski, but the toughest player to pitch to was a guy by the name of Ron Clark. . . I faced him six times, and he hit a home run, triple, double, two singles, and walked once." - pitcher Larry Burchart [1]