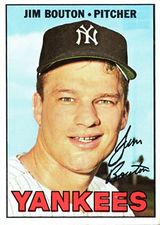 ". . . you spend a good piece of your life gripping a baseball, and in the end it turns out that it was the other way around all the time." - Jim Bouton 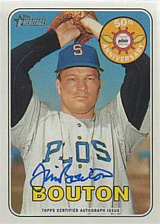 Jim Bouton transformed himself from a fireballer to a knuckleballer midway through his career. After he retired, he made a brief comeback with the Atlanta Braves in 1978 when he was in his late 30s. Though a reasonably successful major leaguer early in his career, Bouton is best remembered today for his bestselling memoir Ball Four, a diary of his 1969 season.

Bouton signed his first professional baseball contract out of Western Michigan University after convincing his father that he would have the same monetary success as pursuing a more traditional career. Bouton, never having been a star in amateur ball, quickly learned to adjust in the minor leagues and made it to the New York Yankees in 1962. Bouton's relationship with the Yankees was tumultuous as he was vocal about his salary and salary negotiations with the press and other ballplayers.

In his youth, Bouton was a fastball pitcher who dominated hitters. He won 21 games in 1963 and 18 in 1964. Although the Yankees lost both the 1963 and 1964 World Series, Bouton pitched extremely well. Interestingly, Bouton would later state in Ball Four that his goal when pitching in such important games was simply to not embarrass himself. Around 1965 or 1966, Bouton developed a problem in his pitching arm and, although he continued to pitch frequently for the Yankees, the situation continued to worsen. Within a few years, his fastball was all but gone. Instead of retiring, he started to use the knuckleball that his father taught him when he was a child.

Bouton resurfaced in the majors as a knuckleball relief pitcher in 1969 with the Seattle Pilots and later the Houston Astros. This period is well documented in Ball Four. Although he was moderately successful, after the backlash against Ball Four (see below), Bouton disappeared from the majors. He continued to pitch for pro and semipro teams and eventually made it back to the majors with the Atlanta Braves for 5 games in 1978 at the age of 39. Bouton had gone 11-9 with a 2.82 ERA with the 1978 Savannah Braves, and some thought that team owner Ted Turner recalled Bouton largely as a way of selling tickets to some September Braves games. Bouton, however, turned people's heads, pitching much better than anyone expected. On September 14th, he threw a three-hitter over six innings to record a victory over the San Francisco Giants. And, on September 24th, he worked eight innings, giving up only two runs, in a hard luck loss against the Cincinnati Reds at home in Atlanta. He retired from baseball after the 1978 season. His last comeback is documented in Ball Five, which was published as an addition to his more famous book.

Bouton, despite his successful baseball career, will forever be better known for Ball Four, which consists of diary entries describing daily life in the game. It was edited by sports journalist Leonard Shecter, a long-time friend of Bouton's. Perhaps the biggest controversy involving Bouton and his book, which was published in 1970, was his description of the habitual use of amphetamines by many major league players. In addition to the controversy surrounding amphetamines, the book was seen by some members of the baseball establishment as a blight on the game because it depicted "the nation's heroes" acting human and doing immoral - but still entirely normal - things like drinking, swearing and chasing women. Commissioner Bowie Kuhn even tried to get Bouton to sign a written apology and claim that the book's events were faked and entirely concocted by Schecter. Bouton, true to his nickname of "Bulldog", refused to cave in to pressure from Kuhn and others, and stood by his story.

A follow-up volume, I'm Glad You Didn't Take It Personally, was issued in 1971, and was dedicated by Bouton to his detractors. Bouton would go on to write several other books, both fiction and non-fiction, and become a fan favorite. The baseball establishment always seemed to distance itself from Bouton, although he was finally invited back to an Old-Timer's Day at Yankee Stadium in 1998.

After his initial 1970 retirement and before his 1978 baseball comeback, Bouton was an occasional actor, appearing in the 1973 Robert Altman film The Long Goodbye, and starring in a short-lived 1976 sitcom version of Ball Four (which he also co-wrote). Bouton was a sportscaster for several New York City based TV stations in the 1970s, and was a co-inventor of Big League Chew, a shredded bubble-gum product designed to replace chewing tobacco. The gum has been very successful - its website says more than 800 million pouches have been sold.

In 2012, Bouton suffered a stroke that impaired his memory and speaking. He died at home in 2019 from cerebral amyloid angiopathy.