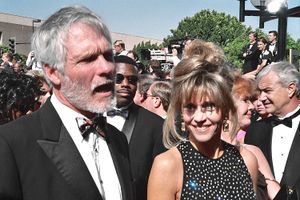 Note: This page links to former owner and manager Ted Turner. For the pitcher who played in 1920, click here.

Robert Edward Turner III
(The Mouth of the South)

Television mogul Ted Turner purchased the Atlanta Braves in 1976 and the NBA's Atlanta Hawks in 1977. He had got his start in business by purchasing a low-powered UHF television station in Atlanta, GA, then making a successful bid to obtain the right to broadcast Braves games in 1974, suddenly making his station a hot property. He then used the powers of microwave broadcasting and cable television, which were in their infancy at the time, to put his station, called WTCG at the time, at the center of a regional and later national broadcast empire. The Braves were an integral part of his programming offer, and when they went on the market in 1976, he purchased the team largely on credit to ensure they would not leave their Atlanta home base.

Turner spent lavishly on free agents, most notably Andy Messersmith and Gary Matthews, hoping to turn around the team's fortunes quickly. He was fined and nominally suspended for a year by Commissioner Bowie Kuhn for tampering in Matthews' case when he stated publicly that the Braves were interested in signing him before he had even become a free agent. This was characteristic of his early hands-on style, that also included an infamous episode when he named himself manager of the Braves in 1977 for one game (which the team lost). The Braves were on a 16-game losing streak at the time, and on May 11th Turner gave manager Dave Bristol a ten-day leave of absence so he could manage the team himself. The fact that a complete neophyte was pretending he could be a baseball manager was a great embarrassment to National League President Chub Feeney; Turner had to step down as manager when it was pointed out that he was in violation of a major league baseball rule that prohibits players and managers from owning shares of their teams. He also clashed with young star Bob Horner who had jumped straight from college to the Braves in 1978 and earned the 1978 National League Rookie of the Year Award in the process. When Horner started the season slowly in 1980, Turner asked that he be demoted to the minor leagues, something to which both manager Bobby Cox and Horner were opposed, resulting in a very public spat in which Horner eventually came out ahead. Turner became notably less involved in day-to-day decisions after that, and the Braves were briefly dominant in 1982 and 1983, then from 1991 onwards.

In addition to his early shenanigans as an owner, Ted Turner was one of the prime forces in shaping the way baseball is broadcast. As the owner of a cable station, he saw the potential that cable television could have in generating new revenue streams and increasing his team's popularity. The early seasons during which the team was on cable TV were not particularly successful, but when technological developments made it possible for Turner's "super-station" WTBS to be carried by most cable distributors in the early 1980s, suddenly the Braves' games were being broadcast nationwide, creating a fan base in all sorts of places that did not have a home team. In 1980, he revolutionized the televized news industry when he founded CNN, the all-news cable channel, and in the early 1990s his fame increased when he married actress Jane Fonda (whom he later divorced), making him one half of one of the planet's most visible couples. The Braves' home for two decades, Turner Field, was named after him.

His Turner Broadcasting company was bought by media giant Time Warner in 1996. This meant that the corporation owned the Braves as well, although in practice, Turner continued to run the team for a number of years as a member of the larger corporation's board. In 2000 Time Warner merged with upstart internet provider America Online, whose chairman was Stephen Chase, to become AOL Time Warner. Turner's ownership of the Braves was further diluted as a result and in 2003, he was pushed aside as part of a corporate coup. Chase took over the team in the interim, which was run as another venture of the unwieldy conglomerate until being sold to Liberty Media in 2007.

Turner is also a yachtsman. He won the 1977 America's Cup with Courageous.