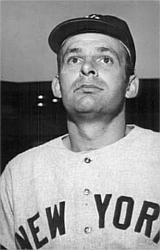 "I’m like, ‘What do I do?’ He said, ‘Go have a couple cold beers and get in the cold tub or something and relax. And then you’ll probably have to write a $500 check. Or you can do what I do, write a $10,000 one and tell them when it runs out, let me know'." - Jeff Francoeur, on Cox's sage advice regarding being ejected, to the Atlanta Journal-Constitution, July 2006 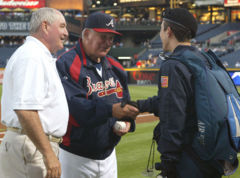 Bobby Cox is a Hall of Fame manager, best known for his longtime association with the Atlanta Braves. Cox was a four-time Manager of the Year, winning in both Atlanta and the Toronto Blue Jays, and passed Sparky Anderson towards the end of his tenure for fourth most victories of all-time. He finished his career 2,195-1,698 with a record 159 ejections, passing the great John McGraw. Additionally, he played third base in parts of two seasons with the New York Yankees, making the 1968 Topps All-Star Rookie Team, managed in the minors for a spell and worked in Atlanta's front office.

Cox was signed by the Los Angeles Dodgers for a $40,000 bonus and spent seven years in the minors with them. He spent the 1967 season with the Braves' AAA club, the Richmond Braves. Dealt to the Yankees for 1968, he replaced Charley Smith at third base. People have disparaged Cox's .229 batting average that year, but it was the heart of the second dead-ball era and his average was actually 15 points higher than the team average of .214. In 1969, the team average went up to .235, while Cox went down to .215 and Jerry Kenney became the regular third baseman. After his major league playing career, Cox played one season for the Syracuse Chiefs and was a player-manager for the Single A Fort Lauderdale Yankees in 1971 (even appearing in 3 games as a pitcher). He then managed one year in Double A and four years in Triple A before coming to the majors as a coach. Cox was a member of the New York Yankees coaching staff in 1977, earning a World Series ring.

Bobby's first big league managing gig was with the Atlanta Braves from 1978 to 1981. He is credited with moving Dale Murphy from first base and catching to center field prior to the 1980 season. Murphy soon broke out, winning two MVP Awards and five Gold Gloves en route to becoming one of the 1980s top stars. Cox was fired just before the Braves won the NL West in 1982 under Joe Torre. He moved along to the Toronto Blue Jays from 1982 to 1985, turning the expansion club from doormats to winners. After back-to-back 89-73 seasons, he led them to their first AL East title in 1985, coming up short against the Kansas City Royals in the ALCS.

When the Jays were eliminated in 1985, Bobby almost immediately rejoined the Braves as General Manager. Upon firing Russ Nixon as manager in June 1990, he announced he would be heading back to the dugout, allowing personnel guru and fellow Hall of Famer John Schuerholz to become GM. Cox was no slouch in the general manager's chair himself. During his tenure, he drafted stars including and not limited to Steve Avery, Tom Glavine, Chipper Jones and David Justice. He was also the one to fleece the Detroit Tigers of John Smoltz, enticing them with "Dour Doyle Alexander for their pennant push in 1987.

In 1991, his first full season back at the club's helm, he turned the Braves from a last-place club into a pennant winner, with the team going all the way to Game 7 of the World Series before bowing to the right arm of Jack Morris and the Minnesota Twins. They returned to the World Series in 1992 before bowing to Cox's old pals, the Blue Jays. He would lead the Braves to triumph over the Cleveland Indians in 1995. Overall, from 1991 to 2005, he won five National League pennants, and fourteen consecutive division titles (discounting the 1994 strike-shortened season during which the Braves finished second, but there was no postseason played), split between the NL West and NL East following realignment prior to 1994. The Braves finally missed a postseason in 2006 when the New York Mets bested them for the division. Cox managed his last season in 2010, returning to the postseason as the National League wild card. On August 12, 2011, the Braves retired his uniform number 6 and inducted him into the team's Hall of Fame.

He was elected to the Hall of Fame by the Veterans Committee on December 9, 2013 and inducted in 2014. Contemporary managers Joe Torre and Tony LaRussa were also elected on the same ballot, all three by unanimous vote, and three players were to join them, including two of Cox's aces with the Braves, Greg Maddux and Tom Glavine, as well as slugger Frank Thomas. In 2019, he took part in pre-game ceremonies for the Braves home opener on April 1st, then the next day he reportedly suffered a stroke and had to be hospitalized. He recovered, however, and was able to return to his familiar seat at SunTrust Park on September 2nd. That season, it was announced he would be inducted into the International League Hall of Fame. 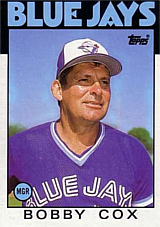 Cox holds the records for most postseason appearances (16) and division titles (15).

Cox is the only man to be ejected from two World Series games. In 1992, he was tossed for throwing a helmet onto the field at SkyDome during Game 3 against the Jays. In Game 6 of the 1996 tilt against the Yankees, he was run for protesting an out call of Marquis Grissom.

On August 14, 2007, Cox broke John McGraw's record for the most ejections in major league history, with 132. As 14 of McGraw's ejections came as a player, Cox had held the ejections-as-manager record outright prior to this point. Umpire Ted Barrett issued the 132nd ejection. He finished his managing career with 159 ejections.