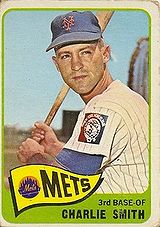 Charley Smith played ten years in the major leagues for seven teams, primarily at third base.

In December of 1966, Smith was traded by the St. Louis Cardinals to the New York Yankees even-up for Roger Maris. Smith had the misfortune of joining the Yankees at a time when the franchise was in rapid decline. The idea that Smith might be of comparable worth to the fan-favorite Roger Maris did not sit well with many Yankees fans. Charley Smith played only one full season (1967) and part of another (1968) for the Yankees before closing out his career with a couple of games with the Chicago Cubs in 1969.

Charley Smith died at the relatively youthful age of 57 in a Nevada hospital following knee surgery.