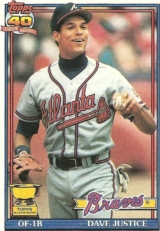 David Justice was an outfielder and designated hitter who made his major league debut in 1989 with the Atlanta Braves. In 1990, he won the National League Rookie of the Year Award with the Braves. In Game 6 of the 1995 World Series, Justice hit the Series-clinching home run in 1995 against the Cleveland Indians' Jim Poole. He later went on to play with the Cleveland Indians, New York Yankees, and Oakland Athletics, hitting over 300 home runs in his career, but is also well-known as the ex-husband of Oscar-winning actress Halle Berry from 1992 to 1996.

David attended Covington Latin High School in northern Kentucky, despite being a Cincinnati, OH native. This school is for gifted students and specializes in an accelerated program, which means that nearly all the students there skip a grade or two. David graduated at the age of 16. The school never even had a baseball team when he went there, and it was terrible at every sport except soccer. David played American Legion Baseball during the summer. 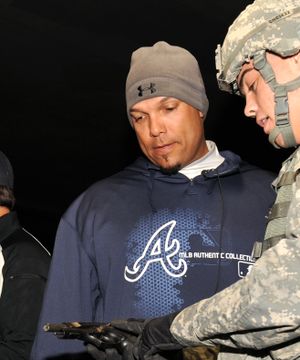 Signed as a fourth-round pick by the Atlanta Braves and scouts Bill Wight and Harold Cronin in the 1985 amateur draft, he spent five years working his way up the ladder in their minor league organization. He hit .300 and slugged .500 at only one stop on the way, a half-season with the Sumter Braves in Class A in 1986, but at all of his stops he drew lots of walks. He started off with the Pulaski Braves in 1985 and hit .245/~.369/.431. He showed good pop, tying Rob Tomberlin for the Appalachian League lead in homers and he also tied for the most sacrifice flies (5). In 1986, Justice hit .300/~.425/.509 for Sumter with 10 homers in 61 games; he was named the 8th-best prospect in the South Atlantic League and finished the year with the Durham Bulls (.279/~.400/.485).

The next year, 1990, he posted .356/~.444/.644 in 12 games at Richmond, and the Braves brought him up to become a regular. He hit .282 in 127 games, with 23 doubles, 28 homers and 78 RBIs. He split his time between first base and right field that first season, but never played first base again in the major leagues after that. He finished ahead of Delino DeShields in the Rookie of the Year vote. In 1991, the Braves famously went from last to first in the NL West, losing the 1991 World Series to the Minnesota Twins. Justice was a key member of the squad, hitting .275 with 21 homers in 109 games as the starting right fielder. He played in the postseason for the first time, contributing a double and a homer in the NLCS against the Pittsburgh Pirates, and a pair of homers in the World Series.

He played 14 seasons in the major leagues. He hit .386 with RISP in 1994. He was frequently injured, managing to get 500 at-bats only three times in his career, but had a lifetime .500 slugging percentage in spite of the injuries and appeared in 6 different World Series. He was a three-time All-Star. He missed the 1996 World Series because of an injury; his absence allowed 19-year-old Andruw Jones to be a starter in the postseason, and was one of the factors that led to the New York Yankees upsetting that heavily-favored Braves in the World Series. After that season, he was traded to the Cleveland Indians, along with Marquis Grissom, in return for Kenny Lofton and Alan Embree in a blockbuster trade. He then helped the Indians reach the World Series in 1997 after hitting 33 homers and driving in 101 runs with a .329 average during the season in what was his best year in the majors. He split his time between left field and DH that season. He hit .333 as the Indians defeated the Baltimore Orioles in the 1997 ALCS, but slumped in the Series against the Florida Marlins, when he hit .185 with no extra-base hits.

The most similar player to Justice, as of 2015, according to the similarity scores method, is Tim Salmon.

He later worked for the YES Network doing color for some New York Yankees games on television, after playing for the Bronx Bombers in 2000 and 2001. When he hit a home run in New York, the Yankees scoreboard would often flash "And Justice For All".

He once appeared on the TV show The Young and the Restless.

"They can't get any rougher on us unless they show up with Uzis." - David Justice, talking about the New York fans

"What the hell was David Justice thinking?" - a website, commenting on the beauty of Halle Berry and the break-up of their marriage