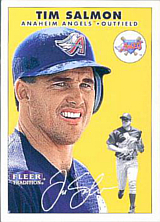 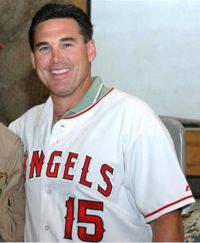 Outfielder Tim Salmon was signed by Joe Maddon for the California Angels as the third round pick of the 1989 amateur draft. He progressed quickly through their minor league system and hit .347 with 29 homers and 105 RBI with the AAA Edmonton Trappers in 1992. After a late season call-up to the majors that year, he was a regular outfielder for the Angels in 1993. He hit .283 with 31 homers to win the 1993 American League Rookie of the Year Award.

In 1995, Salmon had his finest year, hitting .330 with 34 home runs and 105 RBI as the Angels narrowly missed winning the AL West crown. He did not reach the postseason until 2002, when the wild card Angels ended up reaching the World Series. Salmon hit .346 with a pair of homers in the Series, and the Angels beat the San Francisco Giants in seven games to capture their first championship.

In the later part of his career, Salmon was slowed considerably by injuries. He missed the entire 2005 season with rotator cuff and knee surgeries. He entered 2006 as a long-shot to make the team, although many fans were rooting for him. However, he had a good spring and made the team. He hit a respectable .265 with 9 home runs in 76 games. Following the season, Salmon announced his retirement, ending his 15-year career with a franchise-best 299 homers. He owns the record for most career home runs without ever making an All-Star team.

In his first year of eligibility for the Hall of Fame in 2012, Salmon received only 5 votes and was dropped from the ballot.

Salmon was an assistant coach at Scottsdale Christian Academy under Bill Swift. As of 2016 he was head coach at the school.