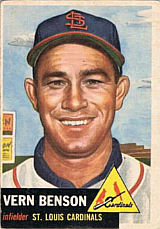 Vern Benson briefly played in the majors with the Philadelphia Athletics and St. Louis Cardinals. Later, he was a manager (including one game at the big league level) and a coach.

Signed by Connie Mack's Athletics in 1943, Benson played in two major league games that year, both against the Chicago White Sox, going hitless in two plate appearances as a pinch hitter. After serving in the U.S. Army during World War II, he returned in 1946, spending most of that summer in the minors. He did appear in 7 early season games for Philadelphia, but once again went hitless (in 5 at-bats). That September, he was traded to the Cardinals along with two other players for Eddie Joost. Benson spent the next several years back in the minor leagues but earned brief call-ups to St. Louis in 1951, 1952, and 1953. He finally recorded his first big league hit on September 9, 1951, lacing a double off Vern Law in the second game of a doubleheader against the Pittsburgh Pirates, more than eight years after his big league debut. He hit .261 in 13 games that year, and the next season he hit 2 home runs in 20 games.

Benson began his managerial career in 1956 with the Winnipeg Goldeyes while still a player. His playing time decreased in each successive year until 1959, when he appeared for the Tulsa Oilers in his final two games as a player. He managed in the minors through July 6, 1961, when he was assigned to a coaching position with the St. Louis Cardinals. He coached there through 1964, when the team won the World Series, and followed manager Johnny Keane to the New York Yankees in 1965, staying until May 7, 1966. He coached the Cincinnati Reds under Dave Bristol from July 15, 1966 through 1969, then the Cardinals again from July 17, 1970 to 1975.

In 1976, when Bristol was named manager of the Atlanta Braves, he hired Benson as a coach. On May 11, 1977, with the team in a 16-game losing streak, Bristol was given a leave of absence by owner Ted Turner so Turner could manage the team himself. After National League President Chub Feeney intervened to force Turner to step down, Benson took over as interim manager on May 12th and put an end to the losing streak that had by then reached 17 games. Bristol returned to the helm the next day. Benson then managed for two seasons in the minor leagues before coaching again under Bristol with the San Francisco Giants in 1980. He later was a Cardinals scout in the 1980s.

Benson's son, Randy, pitched in the minors for the Cardinals.