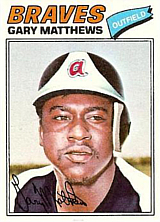 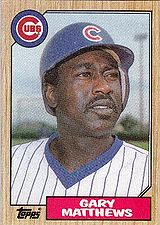 Gary Matthews, often called "Sarge" or "The Sarge", was an excellent player who had 16 years in the big leagues. He was National League Rookie of the Year in 1973, was named to the All-Star team in 1979, and was 5th in the MVP voting in 1984 when he led the National League in on-base percentage for the division-winning Chicago Cubs.

He hit .300 for the San Francisco Giants, the Philadelphia Phillies and the Atlanta Braves at various times in his career. Braves owner Ted Turner was famously accused of tampering when he tried to entice Mathews to join the Braves before he had officially become a free agent after the 1976 season; Mathews's contract was allowed to stand but Turner was suspended for a year by Commissioner Bowie Kuhn.

The most similar player, according to similarity scores, is Dusty Baker, who played for the Atlanta Braves shortly before the Sarge did. His 2,011 lifetime major league hits put him at #279 on the all-time list (through 2019), tied with Johnny Mize. His 234 major league home runs put him at #270 (through 2019), tied with Carlos Gonzalez, Kevin Mitchell and Hall of Famer Paul Molitor.

After his playing career, Gary Matthews was a Chicago Cubs coach from 2003 to 2006. Prior to that, he was hitting coach with the Toronto Blue Jays (1998-1999) and the Milwaukee Brewers (2002). He also spent two seasons as a Blue Jays broadcaster, then worked on Philadelphia Phillies broadcasts from 2007 to 2013.

His son Gary Matthews, Jr. was also a major league player. Sometimes called "Little Sarge", his son played outfield for the 2000 Chicago Cubs, 13 seasons after his dad played his last season for the Cubs. Dave Martinez played with both Gary Matthews Sr. and Matthews Jr. Another son, Delvon, played in the minors from 2000 to 2001.