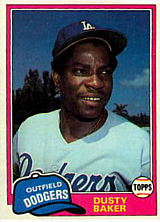 "Donell Nixon says he never met a wiser man than Dusty Baker in his 13 years of professional baseball." - former major leaguer Donell Nixon, about the man who most impressed him in baseball [1] 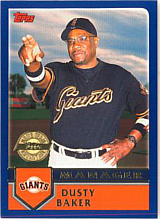 Dusty Baker was a two-time All-Star outfielder during a lengthy playing career. Following his playing days, he spent even more time as a big league manager, leading the San Francisco Giants to the 2002 World Series.

Baker grew up in Sacramento, California, and starred in baseball, basketball, football, and track in high school. He was selected by the Atlanta Braves in the 26th round of the 1967 amateur draft and made his pro debut that summer, hitting .231 in 9 games with the Austin Braves. He reached the majors late the following year, going 2-for-5 in 6 games as a 19-year-old. He had several more cups of coffee with the club over the next three years before finally sticking for good in 1972. He became the Braves' regular center fielder that year and responded by hitting .321 (third-best in the National League) with 17 home runs. The next summer, he hit 21 homers and drove in a career-high 99 runs. He regressed over the following two seasons, and Atlanta, who had high hopes that he would be the next Hank Aaron, dealt him to the Los Angeles Dodgers as part of a six-player trade after the 1975 season.

Baker had a horrendous first season with the Dodgers in 1976, hitting only .242 with just 4 home runs. The club stuck with him, and he responded by hitting .291 with 30 homers in 1977; that year, he was part of the first foursome of teammates (along with Ron Cey, Reggie Smith, and Steve Garvey) to each have at least 30 round trippers. During the NLCS against the Philadelphia Phillies, he hit .357 with a pair of home runs and was named the Series MVP. In the World Series, he hit .292 and added another homer, but the Dodgers fell to the New York Yankees. Baker's numbers dipped to a .262 batting average and 11 home runs in 1978, but he again starred in the NLCS. Facing the Phillies again, he hit .467 in the Series and went 4-for-5 in Game 4 as Los Angeles again advanced to the World Series. He homered in Game 1 of the rematch with the Yankees but only hit .238 overall as the Dodgers again came up short. He hit 29 home runs for the club in 1980 and finished fourth in NL Most Valuable Player voting. The next year, he posted a .320 average in the strike-shortened season, and his team went on to win the World Series.

Baker became a free agent in early 1984 and signed with the San Francisco Giants. He hit .292 with just 3 home runs for them, but in a June 27th game against the Cincinnati Reds, he stole three bases in the third inning to tie a major league record. After one year with the Giants, he was traded across the bay to the Oakland Athletics, for whom he played his final two big league seasons. Based on similarity scores, the most similar player to Baker is Gary Matthews Sr., a player who joined Atlanta's outfield shortly after Baker left town.

After spending 1987 working as a stockbroker, Baker joined the Giants coaching staff under Roger Craig in 1988. He became the club's skipper in 1993. In his first year, he led the team to a 103-59 record and was named NL Manager of the Year. After sub-.500 performances the next three years, he led the team to a National League West title in 1997 and won another Manager of the Year award. His team captured another division title in 2000 and was the wild card in 2002, reaching the World Series in the latter year and falling to the Anaheim Angels. In a decade as Giants skipper, he won two division titles and finished in second place six other times. 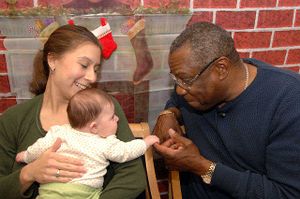 Baker moved on to the Chicago Cubs in 2003 and led the team to a division title in his first year. The Cubs came within a game of going to the World Series for the first time in 58 years, falling to the Florida Marlins in seven games in the NLCS. After winning 89 games in 2004, the club won progressively fewer games each of the next two years, and Chicago failed to offer him a contract extension. After serving as a ESPN broadcaster during the 2007 season, Baker was hired to be the Cincinnati Reds manager on October 14th. In his third season at the helm, 2010, he guided the Reds to their first NL Central division title since 1995, but the team was swept in the first round of the postseason, losing the NLDS to the Philadelphia Phillies after Roy Halladay opened the series by throwing the second postseason no-hitter in history. In 2012, he became the fourth person to get 1,500 hits as a MLB player and 1,500 wins managing in the majors, following Fred Clarke, Lou Piniella and Joe Torre. On September 19, 2012, with the Reds on the verge of clinching another NL Central title, he was hospitalized in Chicago, IL after being diagnosed with an irregular heartbeat. Bench coach Chris Speier took over the team on an interim basis. He was released from the hospital on September 23rd and rejoined the team before its game, although he let Speier, who had clinched the division title in the meantime, continue as skipper. It was later revealed the Baker had suffered a mild stroke while in hospital. He officially resumed his duties as manager on October 1st. The Reds lost the NLDS against the Giants in 5 games, after having taken the series' first two contests on the road. Baker's contract ended after the season, and there was speculation that he would move on because of the health concerns, but on October 15th, owner Bob Castellini announced that Dusty had accepted a two-year contract extension. Dusty was fired after the Reds lost the 2013 Wild Card Game to the Pittsburgh Pirates.

His name resurfaced in the fall of 2015 when the Washington Nationals, who had been set to offer their managerial job to Bud Black, instead turned to Dusty after negotiations with Black over salary and length of contract broke down. He signed a two-year deal on November 3rd to take over starting in 2016. He was taking over a very talented club that had won two division titles in recent years, but had underperformed badly in 2015. His steady and experienced hand helped calm things down, as the Nats quickly took over first place in the NL East and had a sizable lead by mid-season. They won a division title but were eliminated by the Los Angeles Dodgers in the Division Series. 2017 was a carbon copy year, with Washington running away with the division title once again only to be ousted in five games in the Division Series, this time by the Cubs. After that second early exit from the postseason, the Nationals announced on October 20th that he would not return to manage the team in 2018.

After sitting out the 2018 and 2019 season, it looked that he would never have another chance to manage a team, in spite of his expressed interest in doing so. He was not interviewed for the various openings that came up after the 2019 season, but things changed when the sign-stealing scandal linked to the 2017 Houston Astros upended things. Three different managers lost their jobs as a result, and his name emerged as the favorite to replace A.J. Hinch with the Houston Astros, because of his history of managing successful teams, his skill at managing people, and the fact he was not in the organization when the scandal occurred. His lengthy managerial experience also made it easier for him to step in with very little time left before spring training. His hiring was officially confirmed on January 29, 2020.

In civilian life, Dusty is a great music fan and has published a book about his experience at the 1967 Monterey Pop Festival when he was a teenager and met the great Jimi Hendrix. His son Darren baker was born when he was well into his 40s and was already managing the Giants. In the 2002 World Series, Darren famously served as a bat boy for the Giants, even though he was only three, and was almost bowled over in Game 5 when he wandered too close to the plate as a Giants player was running home at full speed; J.T. Snow came swooping in and carried him out of harm's way. Major League Baseball then adopted a rule banning such young children from serving as bat boys for safety reasons. In 2016, Darren reemerged in the news as he was about to enter his senior year of high school, as he was now a top-rated prospect in his age group, with a commitment to play for the University of California unless he was a top pick in the 2017 amateur draft. He was indeed selected in the draft, in the 27th round, by the Nationals, went on to attend the University of California, and was a 10th round pick by the Nationals in 2021.

-- A butcher, a Baker, and a Candlestick maker.

-- They want to have a candy bar named after them.