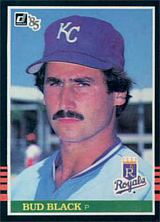 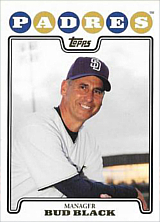 "He may be the brightest manager I've ever seen. . . You don't see many managers . . . that really have an intellectual approach to the game." - Jerry Coleman

Bud Black pitched fifteen seasons in the majors, most notably for the Kansas City Royals, winning 121 games in his career. Following his playing days, he spent several years as a big league coach and then became manager of the San Diego Padres.

The son of minor league hockey player Harry Black Sr., Black was undrafted out of high school and attended Lower Columbia College. While there, he was drafted first by the San Francisco Giants and later by the New York Mets, but he chose not to sign with either club. He went on to attend San Diego State University, where his teammates included Tony Gwynn, Bobby Meacham, and Chris Jones. After graduating with a bachelor's degree in finance, he was selected by the Seattle Mariners in the 17th round of the 1979 amateur draft. Black quickly climbed through the Mariners organization and reached the majors with the club late in the 1981 campaign, appearing in a pair of games. Prior to the 1982 season, he was dealt to the Royals as a player to be named later for second baseman Manny Castillo. After splitting his first season in Kansas City between the rotation and the bullpen, he was used exclusively as a starter the next three summers. He had his best season in 1984, going 17-12 with a 3.12 ERA as the Royals won a division title. In 1985, his record dropped to 10-15, but he appeared in two games in that fall's World Series, which the Royals won.

After bouncing between the bullpen and rotation for several summers, Black was traded to the Cleveland Indians for Pat Tabler in June 1988. He spent a little over two years with the Tribe before being sent to the Toronto Blue Jays during their 1990 pennant run. Following that season, he became a free agent and signed a four-year deal with the San Francisco Giants. In his first year with the Giants, he led the National League with 16 losses. He later returned to the Indians in 1995, his final year as a player, but did not play in that year's World Series, having made his last big league appearance in July. As a player, Black's main teammates were George Brett, Dan Quisenberry, Willie Wilson, Frank White, Charlie Leibrandt and Bret Saberhagen.

Following his playing days, Black spent several years as an Assistant to Indians GM John Hart and was pitching coach of the Buffalo Bisons in 1998. He became the pitching coach for the Anaheim Angels in 2000. He was often mentioned as a candidate when managerial jobs opened up after the Angels won the 2002 World Series and after the 2006 season, he was named skipper of the San Diego Padres. His college teammate, Bobby Meacham, joined him on the Padres staff for a time.

In 2010, Bud managed to keep an outgunned and undermanned Padres team in first place in the NL West for most of the season before being caught and passed by the San Francisco Giants in September, who went on to win the 2010 World Series; the Padres finished a game behind the Atlanta Braves for the Wild Card spot, having nothing to show for a 90-win season. It was the team's best finish in his first eight seasons at the helm, a period in which he incarnated stability in the organization at a time of front office turmoil. On August 24, 2014, he won his 600th game as the team's manager, a 7-4 win over the Arizona Diamondbacks. He was second in team history in terms of managerial wins, behind the man he succeeded, Bruce Bochy and, more remarkably, was only the second person in major league history to have accumulated 100 wins as a pitcher and 600 as a manager, the other being Hall of Famer Clark Griffith. New Padres GM A.J. Preller made a large number of changes before the 2015 season with the hope of bringing the team over the hump, but they did not work. With the team sputtering in fourth place, two games under .500, on June 15th, he fired Black and replaced him on an interim basis with bench coach Dave Roberts before the Padres promoted AAA manager Pat Murphy the next day.

On October 28, 2015, the Washington Post announced that Black would be appointed as the new manager of the Washington Nationals, succeeding Matt Williams, in the coming days. Before the deal could be finalized, negotiations broke down and a week later, the Nats offered to job to Dusty Baker. It turned out the Nationals offered Black only a one-year deal with a below-market salary, which he understandably turned down. With no other managerial openings available, Black returned to his former organization, now the Los Angeles Angels of Anaheim, as a special assistant to first-year General Manager Billy Eppler. On November 6, 2016 he did land another managerial job, being hired by the Colorado Rockies to succeed Walt Weiss in 2017. He has guided the Rox to two wild card appearances.