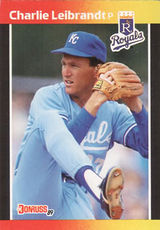 Charlie Leibrandt made his major league debut with the Cincinnati Reds late in the 1979 season and pitched three times that year, but was still added to the team's postseason roster for the 1979 NLCS against the Pittsburgh Pirates. He pitched a third of an inning in the series, retiring the only batter he faced. He then spent the entire 1980 season with the Reds, going 10-9, 4.25 in 36 games, including 27 starts. He also spent part of the 1981 season with the Reds, and then in 1982 was a poor 5-7, 5.10 in 36 games. He spent 1983 in the minors, but was traded to the Kansas City Royals in return for Bob Tufts in a minor league deal on June 7th.

Leibrandt experienced a career renaissance with the Royals starting in 1984, when he was 11-7, 3.63 in 23 starts after starting the year in the minors. He was picked to start Game 3 of the 1984 ALCS against the Detroit Tigers with the Royals facing elimination. He pitched a very good game, allowing only one run on three hits in 8 innings, but Milt Wilcox and Willie Hernandez combined to shut out the Royals, 1-0. In 1985, he went 17-9 for the Royals with a 2.69 ERA, with both his win total and ERA being career bests. He was 1-2 in the ALCS against the Toronto Blue Jays, but that win was enough to get the Royals into the World Series, as it came in relief in Game 7, when he took over for Bret Saberhagen after three innings as Royals manager Dick Howser decided on the strategy in order to turn around the Blue Jays' line up based on multiple platoons. He pitched 5 1/3 innings, allowing 2 runs, before leaving way for Dan Quisenberry in the 9th, who closed out the 6-2 win. He lost Game 2 of the World Series, 4-2, to the St. Louis Cardinals, then gave up one run in 7 1/3 innings in Game 6, the lone run coming in the 8th. That set up the stage for the Royals' dramatic comeback in the 9th inning, best known for the controversial call at first base by umpire Don Denkinger as the Royals walked off with a 2-1 win, forcing a Game 7 which they also won.

Now firmly established as a solid major league starter, Charlie continued to pitch well for the Royals over the next few seasons, although the team became less and less competitive. He went 14-11 in 1986 and 16-11 in 1987. 1987 was a year when offensive numbers shot up throughout the majors, so his 3.41 ERA that year was excellent, worthy of an ERA+ of 134. Offense then went into a deep freeze the next year, 1988, so his 3.14 ERA, seemingly better, was actually not as good in context, but was still well above average at 126. From 1985 to 1988, he won over 10 games and pitched over 200 innings every year, and while he was playing second fiddle to top young pitchers on the team such as Saberhagen and Mark Gubicza, he was extremely valuable. But, as a soft-tosser who relied mainly on pinpoint control to get batters out, he was gone as soon as he had one poor year, and that came in 1989, when he went 5-11 and his ERA shot up to 5.14. After the season, the Royals shipped him to the Atlanta Braves along with Rick Luecken in return for 1B Gerald Perry and a minor leaguer.

Leibrandt found a third wind in Atlanta starting in 1990. Pitching for a last-place team that season, his record was only 9-11, but his ERA was a very good 3.16 (ERA+ 128). In 1991, the Braves suddenly turned things around, with young starters (and future Hall of Famers) John Smoltz and Tom Glavine blossoming into stars. Leibrandt was the steady veteran of the staff, going 15-13, 3.49 in 36 starts, logging 229 2/3 innings as the Braves managed to finish just ahead of the Los Angeles Dodgers and capture a division title. He started Game 4 of the 1991 NLCS against the Pittsburgh Pirates, after Smoltz, Glavine and another youngster who seemed just as talented at the time, Steve Avery, had taken the mound in the first three contests, and he gave up 2 runs in 6 2/3 innings without being involved in the decision. The Braves upset the Pirates and Charlie then started the World Series opener against the Minnesota Twins on October 19th. Matched up against Jack Morris, he gave up 4 runs in 4 innings and was charged with the loss. He was not used again until Game 6, on October 26th, when he came in relief in the bottom of the 11th inning. The first man he faced, Kirby Puckett, hit a drive to deep left for a walk-off home run at the Metrodome, giving the Twins a 4-3 win and forcing a Game 7, which the Braves lost in epic fashion. He and the Braves had another good season in 1992, when he went 15-7, 3.36 in 32 games, pitching slightly less as the youngsters were now the leaders of the staff. The Braves won the NL West again and faced the Pirates in the NLCS in a rematch of the previous season. Leibrandt made a couple of relief appearances, in Games 5 and 6, both of which were lost by Atlanta before they returned to the World Series on the back of Sid Bream's famous run around the bases in Game 7. His final postseason appearance was another Game 6 extra innings affair, this time against the Toronto Blue Jays on October 24th. He came in in the 10th inning with the score tied, 2-all, and pitched a clean inning allowing only a single to Kelly Gruber, in the top of the frame. However, the Braves went down in order against Tom Henke, and in the 11th, everything unraveled, after one out, as he hit Devon White with a pitch, allowed a single to Roberto Alomar, and then with two outs, a two-run double to Dave Winfield. The Braves managed to get back one of the runs in the bottom of the inning, leaving the tying run on third base when Otis Nixon unsuccessfully tried to bunt his way aboard with two outs. He was thus tagged with the Series-ending 4-3 loss.

Charlie pitched one final season, in 1993, after having been traded to the Texas Rangers along with Pat Gomez in return for 3B prospect Jose Oliva. At 36, he still put up creditable numbers, going 9-10, 4.55 in 26 starts. He became a free agent after the season and chose to retire.