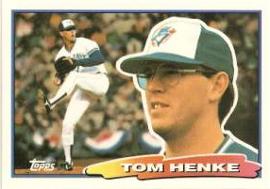 Tom Henke threw a fastball, splitter, slider and forkball. He did not yield a run in the first 24 innings he pitched in 1987. In July, 1985, he did not allow a run in his first 11 appearances after being recalled from Syracuse. With Syracuse that year, he had 18 saves in 51+ innings of work.

When he eclipsed 300 saves, he was only the seventh to do so at the time. His nephew Travis Henke later played pro ball.