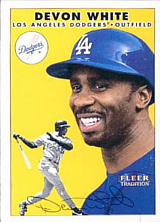 Devon White was outfielder and baserunning coordinator in the Washington Nationals' farm system from 2008-2010. He joined the Chicago White Sox as a minor league baserunning coordinator in 2011 and 2012. He became the hitting coach of the Buffalo Bisons in 2017, then was position coach for Buffalo in 2018-2019. He was scheduled to coach for Buffalo in 2020 before the season was cancelled due to Covid-19 the did return to Buffalo in 2021.