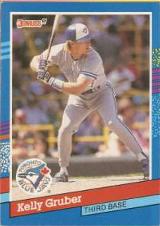 Kelly Gruber played 10 seasons in the major leagues, winning a Gold Glove at third base and being named twice to the All-Star team. He was fourth in the MVP voting in 1990. He hit for the cycle on April 16, 1989 against the Kansas City Royals. In 1992, when he had an off-year, he was on the World Series-champion Toronto Blue Jays.

Kelly Gruber was selected by the Blue Jays from the Cleveland Indians in the 1983 Rule V Draft, one of a number of excellent picks made by the Jays in the Rule V Draft during the 1980s. He had been a first round draft choice by the Indians in 1980 but had been slow to reach the majors, and the Indians gave up on him. With the Jays, he only played briefly in the majors in 1984 and 1985 before earning a job as a utility player in 1986. In 1987, he became the team's starting third baseman, replacing the long-time platoon tandem of Garth Iorg and Rance Mulliniks.

His career ended because of a degenerative disk injury in his neck. He was still playing well, as his OPS+ of 103 in 18 games with the California Angels in 1993 attests; the Jays had traded him to the Angels in return for infielder Luis Sojo the previous off-season.

He attempted a comeback in 1997, playing 38 games for the class AAA Rochester Red Wings. He hit .250, played 21 games at second base, 8 games at first base and 6 games in the outfield; he did not register any playing time at his old home, third base.

Currently, Kelly Gruber is the founder and CEO of Gruber Sports and Entertainment Inc, a promotional company based in Toronto.