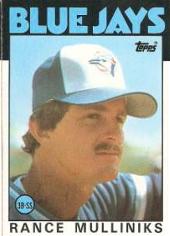 Rance Mulliniks was an infielder whose best offensive year was 1984, when he hit .324 in 343 at-bats for the Toronto Blue Jays. A career .274 hitter, Mulliniks was drafted by the California Angels in the 1974 amateur draft, then dealt to the Kansas City Royals before landing in Toronto in 1982 where he stayed on until his retirement after the 1992 season. Never a power hitter, Mulliniks has been called a major influence and mentor to John Olerud and Jeff Kent, who both broke into the majors with the Blue Jays in the early 1990s.

He spent time working as a hitting instructor in the San Francisco Giants and Chicago White Sox systems before joining the Blue Jays broadcasting team as a color commentator. He was a coach for the South Bend Silver Hawks in 1996 and Birmingham Barons in 1997.

Rance also was a hitting coach for the College of the Sequoias. He is married and has 4 children: Ryan, Merissa, Whitney, and Seth. Mulliniks' father, Harvey Mulliniks, pitched in the New York Yankees chain in 1956-1957.