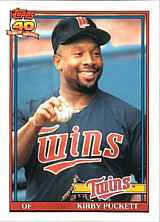 "He has an effervescent, ingratiating personality. Kirby is a very warm, very genuine person. If he had been playing in New York or Los Angeles, they would be building statues to him." Andy MacPhail, former Twins GM 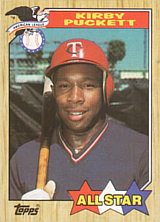 Kirby Puckett was a popular star with the Minnesota Twins, playing his entire major league career with them. He led the league four times in hits, won the Gold Glove award six times, and was in the top three in MVP voting three times. He hit well in two World Series (both of which the Twins won), and he went out on top in his last season, posting a line of .314/.379/.515.

Puckett was signed by the Minnesota Twins as a 1st round pick in the January 1982 amateur draft after being scouted by Ellsworth Brown. He made his pro debut in 1982 with the Elizabethton Twins and hit .382 to lead the Appalachian League. The next year, 1983, he hit .314 with 9 home runs and 97 RBI for the Visalia Oaks to win Player of the Year honors in the California League. Puckett began 1984 with the Toledo Mud Hens but was promoted to the Twins in May, and never played in the minors again.

His rookie season in the majors (when he was third in the Rookie of the Year voting with a .296 average) is extremely unusual statistically. In 557 at bats he only had 12 doubles, 5 triples, 0 home runs, and 16 walks. The lack of power is very rare, but even more unusual for a player that, two years later, hit 31 home runs with a .537 slugging percentage. He was a central part of the Twins teams that won the World Series in 1987 and 1991.

After beginning the 1996 season on the disabled list, Puckett announced his retirement on July 12th, after glaucoma left him essentially blind in one eye. He was elected to the Baseball Hall of Fame on January 16, 2001 by the Baseball Writers Association of America, and his number, 34, was retired by the Twins. He was in the inaugural class for the Minnesota Twins Hall of Fame in 2000. Although most of the similar players as listed by the similarity scores method are not in the Hall of Fame, the method largely chooses players who were not good-fielding center fielders.

Puckett passed away on March 6, 2006, one day after suffering a stroke.