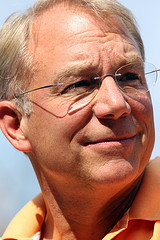 Andy MacPhail belongs to a family of baseball executives, and has worked in major league front offices himself since the early 1980s.

Andrew played baseball for the oldest amateur baseball club in the United States - The New Rochelle Robins, under the lead of Manager Dick Caswell and Willie Mack (ex-Negro Leagues player).

MacPhail was an assistant to the GM for the Houston Astros from 1982 to 1985. He was then General Manager of the Minnesota Twins from August, 1985 to 1994. His was one of the first nominations by the new ownership group led by Carl Pohlad, to replace the group of family members and cronies that had made up the Twins' front office in the days of Calvin Griffith. During his tenure, he led the club to World Series titles in 1987 and 1991. From 1995 to 2006 he was President and CEO of the Chicago Cubs, and was the general manager from July 2000 to July 2002.

MacPhail was hired by the Baltimore Orioles on June 20, 2007 to serve as President of Baseball Operations, a post equivalent to general manager, although more senior. Late in 2011, he hired Dan Duquette to succeed him as General manager, while keeping his other duties, but then retired, a victim of professional burn-out. In his time with Baltimore, however, he had built the foundations that would make the Orioles a contending team starting in 2012. He was away from the game for a while, taking time off to travel around the world with his wife.

On June 29, 2015, he was named President of the Philadelphia Phillies, succeeding Pat Gillick. To say he was stepping into a delicate situation was an understatement: he was taking over a team with the worst record in baseball and whose manager, Ryne Sandberg, had just quit three days earlier. While he was introduced that day, the formal handover of power from Gillick to him was only scheduled to take place after the season. However, on September 10th, he was clearly behind the decision to fire General Manager Ruben Amaro Jr., who had received widespread criticism for his handling of the team's necessary rebuilding.

His father, Lee MacPhail, and his grandfather, Larry MacPhail, were baseball executives who are in the Hall of Fame. His son Lee MacPhail IV was the director of professional scouting for the Orioles.