Pat Gillick pitched for the University of Southern California baseball team that won the 1958 College World Series. After school, he was a minor league pitcher for five years from 1959 to 1963 in the Baltimore Orioles' organization, but arm troubles meant an early end to his playing days.

Gillick moved to the expansion Toronto Blue Jays as assistant GM in 1977 and GM from December, 1977 to 1994. He is considered by many to be the chief architect who transformed the club from an expansion franchise to a team that won back-to-back World Series titles in 1992 and 1993. He was also successful in stints with the Baltimore Orioles (1996 to 1998) and Seattle Mariners (2000 to 2003). Following the 2005 season, he replaced Ed Wade as the GM of the Philadelphia Phillies. In his final season with the Phillies in 2008 Gillick won his third World Series title. He stepped down in favor of Ruben Amaro Jr. but stayed with the team as Senior Advisor to the President/General Manager. In 2014, he succeeded David Montgomery, then a year later handed the position to Andy MacPhail.

Replica banner as used for the "Level of Excellence" at Rogers Centre.

The California native was voted into the Canadian Baseball Hall of Fame in 1997. His name has been enshrined at the Rogers Centre, having been inducted into the Toronto Blue Jays "Level of Excellence" on August 8, 2002. 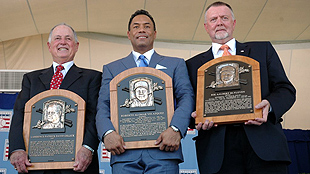 Gillick (left), Roberto Alomar and Bert Blyleven with their Hall of Fame plaques

Gillick was elected to the Hall of Fame by the Veterans Committee on December 6, 2010, in an election comprising executives and players from the expansion era. He was the sole person on the ballot to be chosen, with former Player's Association head Marvin Miller falling one vote short. He was formally inducted into the Hall on July 24, 2011, alongside Bert Blyleven and 2B Roberto Alomar, who was a star of the back-to-back Toronto Blue Jays championship teams that Gillick put together.