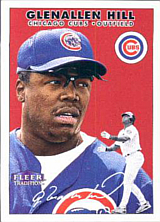 Glenallen Hill once hit a home run onto a rooftop on Waveland Avenue outside of Wrigley Field. He was also the first man to hit a home run completely out of Safeco Field, having done it during batting practice in 2000. That feat wouldn't be replicated for 16 years.

He was the victim of perhaps the most bizarre injury in baseball history. He suffered cuts, scrapes, and bruises while sleepwalking during a nightmare about spiders.

His defensive play was once described as "akin to watching a gaffed haddock surface for air." He once was arguing balls and strikes with an umpire, who ordered the pitcher to deliver the next pitch while Hill was standing several feet out of the box. With a two strike count, Hill jumped into the box while the ball was being delivered and amazingly slapped the ball to right field for a single.

Hill was a coach for the Visalia Oaks (2004) and Modesto Nuts (2005-2006) and replaced Chad Kreuter as manager of the Nuts in June 2006. He was promoted to the Colorado Rockies coaching staff following in 2007. After six seasons on the big league staff, Hill became manager of the Colorado Springs Sky Sox in 2013.

Hill admitted in February of 2008 to using performance-enhancing substances during his career. He said he had made poor decisions in his past. His son, SS Glenallen Hill Jr., was a fourth-round pick by the Arizona Diamondbacks in the 2019 amateur draft.