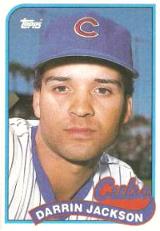 A journeyman outfielder, Darrin Jackson spent a dozen seasons in the majors and two in Japan. Since his playing career ended, he has been a radio and television broadcaster for the Chicago White Sox.

Jackson was selected by the Chicago Cubs in the second round of the 1981 amateur draft and signed by scouts Gene Handley and Harrison Wickel several days later. He made his pro debut that summer with the GCL Cubs and spent the next year with the Quad Cities Cubs, stealing 58 bases and earning a spot on the Midwest League All-Star team. After spending 1983 with the Salinas Spurs, he was with the Midland Cubs in 1984 and led the team with 132 hits. He began the next season, 1985, with the AAA Iowa Cubs, but after hitting just .175 in 10 games was sent down to the Pittsfield Cubs. He was called up to the big leagues with the Cubs for five games that June, earning just one hit (off New York Mets pitcher Ed Lynch, the Cubs' future GM) before being sent back to Pittsfield to finish the year. Back with Pittsfield in 1986, he stole 42 bases.

Jackson moved up to AAA Iowa in 1987 and hit .274 with 23 home runs, 32 doubles, and 81 RBIs for the club. He earned a September call-up to the majors and notched 4 hits in 5 at-bats before his year was cut short by surgery to remove a small tumor. He bounced back and appeared in 100 games for the Cubs in 1988. On August 14th and August 16th of that year, he hit home runs in consecutive at-bats, and on September 17th, he clubbed a pair off homers against the St. Louis Cardinals. He made the Cubs' Opening Day roster in 1989 but hit just .219 through June and was sent down to Iowa. Recalled by Chicago in late July, he was traded to the San Diego Padres a month later for Luis Salazar and Marvell Wynne. He made 23 late-season starts in center field for the Padres that summer and hit .207 for the club.

After splitting the 1990 campaign between the Padres and the Las Vegas Stars, Jackson became San Diego's regular centerfielder in 1991, hitting 21 home runs. He also pitched 2 innings in a game against the Houston Astros on May 26th and smashed his first big league grand slam on August 25th off Bob Scanlan of the Cubs. The next summer, 1992, he played in 155 games for the Padres, hitting 17 homers.

Prior to the 1993 season, Jackson was dealt to the Toronto Blue Jays for Derek Bell and Stoney Briggs, and in June of that year he was sent to the New York Mets for Tony Fernandez. However, he hit just .195 in New York and missed six weeks of the season with hyperthyroidism. A free agent, he was signed by the White Sox after the season. A regular in the outfield for the Sox in 1994, he was hitting .312 with 10 home runs at the time of the season-ending strike.

Jackson played for the Seibu Lions in Japan in 1995 and 1996, hitting 39 home runs over two seasons with the club. He was signed by the Minnesota Twins in 1997 and after starting the year with the AAA Salt Lake Buzz, he was soon back in the majors, driving in a career-best 6 runs in his first game with the Twins on May 16th. Later that summer, he was traded to the Milwaukee Brewers for Mike Fieldbinder. After hitting just .188 in the first half of 1998 for Milwaukee, he went on to hit .291 following the All-Star break. He was re-signed by the White Sox in 1999 and spent his final big league season there.

Since retiring as a player, Jackson has been a broadcaster for the White Sox. From 2000 to 2008, he broadcast Sox games on television alongside Ken Harrelson, and in 2009 he moved to radio, where he was teamed with Ed Farmer.