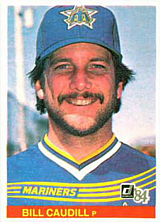 “You’ve got to have fun in order to win." - Bill Caudill

Bill Caudill was one of the top relievers in the early 1980s, recording 106 saves over nine seasons in the majors. Known as one of baseball's biggest flakes during his career, Bill took the mound to "The Pink Panther Theme" during his run with the Seattle Mariners.

Selected by the St. Louis Cardinals in the eighth round of the 1974 amateur draft, Caudill was primarily a starter in the minors, playing in the Cardinals and Cincinnati Reds organizations before being traded to the Chicago Cubs after the 1977 season. He reached the majors with the Cubs in 1979, going 1-7 with a 4.80 ERA in 29 games split between the rotation and bullpen. He pitched well for Chicago the following season, posting a 2.19 ERA in 72 games for a last-place club. In the strike-shortened 1981, Bill drew his final starting assignments, making 30 appearances (10 starts) with a 1-5, 5.83 record.

Prior to the 1982 season, Caudill was traded to the New York Yankees, who then dealt him to the Seattle Mariners just five days later. Bill got off to a roaring start in his new digs. On Opening Day at the Kingdome, the Mariners introduced their new bullpen car, "Tugboat". During the pregame hoopla, Bill stole the keys to the car, leaving Tugboat stranded on the field and delaying the game. He became "The Inspector", earning the Pink Panther theme, after routine visits to the clubhouse with a giant magnifying glass to inspect the team's bats for hits. Amid all the hijinks, he found immediate success on the mound with the M's, going 12-9 with a 2.35 ERA and 26 saves in his first summer with the team. After recording 26 saves again in 1983, but slumping to a 2-8, 4.71 record, he was dealt to the Oakland Athletics.

Still a super-flake, Bill saved a career-best 36 games with a 9-7, 2.71 record for the A's and appeared in the 1984 All-Star Game. He had a day to remember at Candlestick Park, striking out two Hall of Famers (Tim Raines and Ryne Sandberg) and Keith Hernandez in his inning of work. Following his peak season, he was sent to the Toronto Blue Jays for Alfredo Griffin and Dave Collins. Even with a 4-6, 2.99 record and 14 saves in 1985, he lost his closer's role to the new stud reliever in town, "The Terminator" Tom Henke. After a rough 40 games with Toronto in 1986, he ended his playing career with 6 games in Oakland in 1987.

Caudill was the first client of super agent Scott Boras (who was also his minor league teammate). Following his playing career, he was co-coach with former teammate Julio Cruz at the Eastside Catholic High School in Kirkland, WA for several years. He also has spent time working for Boras.