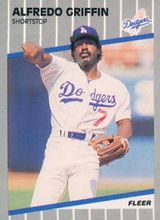 Shortstop Alfredo Griffin was the 1979 American League Rookie of the Year with the Toronto Blue Jays, sharing the award with 3B John Castino of the Minnesota Twins, as the vote finished in a tie. Griffin had actually made his major league debut three years earlier, with the Cleveland Indians in 1976. He played 12 games that year, going to bat only four times, then also had brief cups of coffee with the Indians in 1977 and 1978, but his rookie eligibility remained intact as he played only a total of 31 games in the three seasons combined. Following the 1978 season, he was traded to Toronto along with Phil Lansford in return for P Victor Cruz.

Griffin displaced light-hitting Luis Gomez as the Blue Jays' starting shortstop in 1979 and hit .287 in 153 games, scoring 81 runs and banging 10 triples; he also stole 20 bases and played solid defence. He then kept the starting job until 1984, when a young Tony Fernandez came up and displaced him. During those six seasons he started nearly every day, but apart from his rookie year, his highest batting average was only .250, and fell as low as .209 in 1981. He led the American League with 15 triples in 1980, highlighting his excellent speed, but he was a poor basestealer, with a high of 18 after his rookie year, and a lot of caught stealings. His defensive play was very good however, and he was considered a leader on the young team. He was named to the All-Star team his final season with the Jays, a bit of a surprise as he was in the process of losing his starting job at that point.

Before the 1985 season, he was traded to the Oakland Athletics in a deal for Bill Caudill. He was the starter at shortstop for the next three seasons, including playing all 162 games in both 1985 and 1986. He hit better - his lowest batting average was .263 in that span - and also stole more bases (24, 33 and 26). He won a Gold Glove his first year in Oakland and generally was one of the better players on mediocre teams, although things began to change in 1987 with the emergence of Mark McGwire and Jose Canseco. Following that season, he was traded again, this time to the Los Angeles Dodgers in a blockbuster deal that involved a number of other well-known names, such as Bob Welch, Jay Howell and Matt Young, and some youngsters who would also be major league regulars in Kevin Tapani and Wally Whitehurst.

The deal benefited both teams as both the Dodgers and the Athletics won division titles in 1988. and in fact met in that year's World Series. For the Dodgers in 1988, Griffin struggled however, hitting just .199 in 95 games, but Dave Anderson, with whom he shared playing time, did poorly as well and his bat was practically invisible during the second half. As a result, the better-fielding Griffin was the starter throughout the postseason. He went just 4 for 25 in the pitching-dominated NLCS win over the New York Mets, and then 3 for 16 in the World Series, but others got the key hits - most notably Kirk Gibson and his legendary one-legged pinch-hit homer to win Game 1 - and his defensive play was an important contribution to a Dodger team that won the World Series mainly with strong pitching. He improved notably in 1989, when he hit .247 in 136 games with 27 doubles, but the Dodgers began to sink in the standings. 1990 was his last season as a starter, playing 141 games but hitting just .210. In 1991, he lost his starting job to Jose Offerman, as he hit a completely powerless .243 in 109 games. He then finished his career returning to Toronto where he played as a utility infielder in both 1992 and 1993, being part of a World Series-winning team both years, and appearing in the Fall Classic as a defensive replacement both seasons.