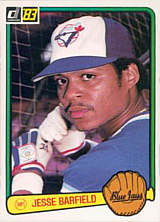 Known for his home run power and his excellent defense, outfielder Jesse Barfield starred for the Toronto Blue Jays for almost a decade.

Barfield was signed as the ninth round of the 1977 amateur draft by the Blue Jays and scout Robert Engle. He earned his first look at major league ball with a September call up in 1981. He hit 18 homers in 1982 and 27 in 1983 but in 1984 saw less playing time with George Bell taking over in right. Bell moved to left in 1985, and Barfield became the regular right fielder, hitting .289 with 27 home runs, 84 RBI, and 22 stolen bases as the Jays won their first AL East title.

Barfield had his best year in 1986, when he hit .289 with 108 RBI and led the American League with 40 homers. Additionally, he was an All-Star and won a Gold Glove. He added another Gold Glove the following year. Early in 1989, he was traded to the New York Yankees for Al Leiter, and he spent the final three and a half years of his career in the Bronx. He played his final season with the Yomiuri Giants in 1993, along with former outfield mate Lloyd Moseby, batting .215/.357/.477 with 26 home runs in 104 games. After his playing days were over, Barfield was a Houston Astros coach in 1995 and a member of the Seattle Mariners staff in 1998 and 1999.

He is the father of second baseman Josh Barfield, and minor league outfielder Jeremy Barfield. Both Jesse and Josh were teammates with David Wells. In 2006, Barfield was taken to the hospital with a head injury after an altercation with Jeremy [1] who was 18 years old at the time.