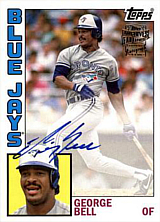 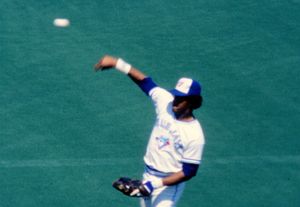 George Bell played twelve seasons in the majors, hitting 265 home runs with a .278 batting average. He did this largely before expansion, when home runs were harder to hit. In his best year, with the 1987 Toronto Blue Jays, he won the MVP award. He also had two other seasons when he finished fourth in the MVP voting.

He was part of the Toronto B's outfield of the mid-1980s, along with Jesse Barfield and Lloyd Moseby. After hitting three homers off Bret Saberhagen on Opening Day 1988, he was on pace to hit 486 home runs for the season. Following a stint with the Chicago Cubs, Bell was traded to the Chicago White Sox for Sammy Sosa.

He is the brother of the late Juan Bell and minor leaguer Rolando Bell.

His ability deteriorated rather quickly. In both 1991 and 1992, he hit 25 home runs. At the start of the 1993 season (an expansion season when hitting increased notably in the league), he was batting clean-up for a White Sox team that went on to win the division with 94 victories. Frank Thomas, who batted third that season, won the MVP Award. Bell, in 410 at-bats, hit .217 with 13 home runs. He did not appear in postseason play, and was released in October. The White Sox replaced his bat with that of Julio Franco in 1994, and went on to lead the division again, although the season ended early because of the 1994 strike. Bell was done at the age of 34. Similarity scores show that similar players include Ben Oglivie, Raul Mondesi and Eric Karros.

George was a roving minor league hitting coach for the Blue Jays in the 2000s. By 2013, he was a consultant for the Jays. That year, Bell was voted into the Canadian Baseball Hall of Fame with fellow 1980s-1990s outfielders Tim Raines and Rob Ducey, as well as two off-the-field personalities, announcer Tom Cheek and executive Nat Bailey. George is also a member of the Toronto Blue Jays Level of Excellence.