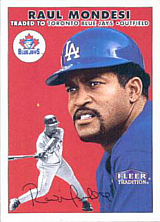 Raúl Mondesí played thirteen years in the major leagues, hitting 271 home runs and stealing 229 bases. He was the 1994 National League Rookie of the Year and won Gold Gloves in 1995 and 1997 while playing for the Los Angeles Dodgers. For five years running (1999-2003) he was one of the ten highest-paid players in the league.

He was on the Dominican Republic national team roster for the 2007 Pan-American Games but did not play, even though a much older teammate, Luis Polonia, got into a couple of games.

He was the first Dodgers player to have a 30-30 season; Matt Kemp would be the second.

His oldest son, Raul Mondesi Jr. began his professional career in the Milwaukee Brewers organization in 2010, while a second son, Raul Adalberto Mondesi began playing in the Kansas City Royals organization in 2012 and became the first player to make his major league debut in a World Series in 2015.

He was the mayor of San Cristobal, San Cristobal from 2010 to 2016, but after his term ended he was investigated for fraud. On September 20, 2017, he was sentenced to 8 years in prison on charges of corruption and embezzling $6 million from public funds in his time as mayor. He was also barred from holding any public office for ten years.