Surrounded by Exhibition Park, Exhibition Stadium was the converted Canadian National Exhibition grandstand. The single-decked park, located near Lake Ontario, was rectangular in shape and was designed for the Canadian Football League's Toronto Argonauts. A scoreboard was located in deep right field, over 50 yards beyond the fence. Despite short 330 foot foul lines, the stadium never was a big home run park. Weather was also a problem at Exhibition Stadium. Wind, rain, fog and snow often plagued games here. Additionally, seagulls frequently swarmed the park after games in search of food. In 1974, an expansion on the park was completed, bringing the capacity up to nearly 40,000.

The San Francisco Giants nearly relocated to Exhibition Stadium for the 1976 season, but after the move was not approved, Toronto was granted an American League expansion of 1977 franchise, the Toronto Blue Jays, for 1977. The Blue Jays' first game here, on April 7, 1977, against the Chicago White Sox, holds the distinction of being the only major league game ever played with snow covering the entire field. The Zamboni machine from Maple Leaf Gardens was brought to the park and repeatedly cleared the infield of snow between innings. The next year, on June 26, 1978, the Blue Jays had 24 hits in a game here and defeated the Baltimore Orioles 24 to 10. In 1985 Blue Jays1985, the American League Championship was played here. The Jays took a three games to one lead against the Kansas City Royals, but ended up losing the last three games and the series. Midway through the 1989 season, upon the completion of the Skydome, the Blue Jays left Exhibition Stadium. 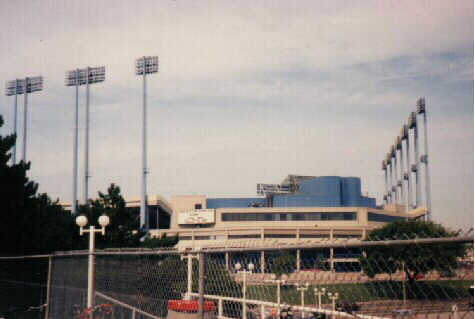