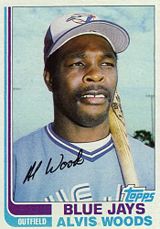 Al Woods, who played his first three seasons of major league baseball using his full name Alvis Woods, was an outfielder for the Toronto Blue Jays from 1977 to 1982, and for the Minnesota Twins in 1986.

He is one of the comparatively few players to hit a pinch-hit home run in his first major league at bat. It came in the first game ever played by the Blue Jays, April 7, 1977, against the Chicago White Sox.

After his playing career, Al Woods became a sheriff in the Bay Area.