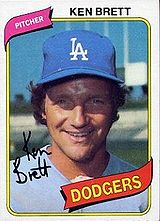 "Nothing ever fazed him. We had no hesitation about putting him on the World Series roster, none at all... He had the guts of a burglar." - Dick Williams, Hall of Fame manager, on using Ken in the 1967 World Series.

"I'll never forget the first time he came on in relief for the Royals. The bullpen was out in right field and they opened up the gate, and he came running in like an airplane -- arms spread out like wings, banking left, banking right, banking left and banking right. I'm on the mound with Jim Frey, our manager, and Jamie Quirk, who I'd played with for years and was Ken's dear friend. And I looked at Jamie and he looked at me, and I said, 'Now I know why he's been traded 10 times.'" - George Brett 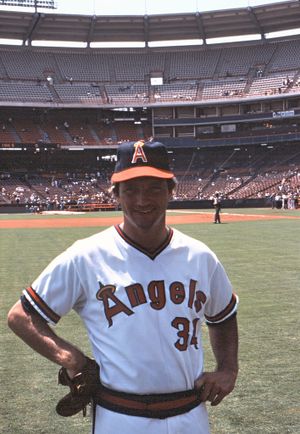 The brother of Hall of Famer George Brett, Ken Brett pitched fourteen years in the majors, and was an All-Star in 1974 with the Pittsburgh Pirates. After his playing career ended, he was a broadcaster for the Seattle Mariners and California Angels. He died of brain cancer in 2003.

As an 18-year-old rookie in 1967, he appeared twice in the 1967 World Series for the Boston Red Sox. He is, through 2019, the youngest player to appear in the Fall Classic. When his brother George broke in during the 1973 season, Ken was already in his sixth major league season, one in which he went 13-9. He pitched with 10 teams in his career, recording 83 wins. For a pitcher of his era, he was a remarkably good hitter. He had a lifetime batting average of .262, and slugged .406. With the Philadelphia Phillies in 1973, he drove in 16 runs with a .462 slugging percentage. During that season, he homered in four consecutive games. With the 1974 Pirates, he hit .310 and drove in 15 runs with a .448 slugging percentage. In both years, the National League average slugging percentage was around .370. As a result, he was used regularly as a pinch-hitter throughout his career. During the years 1973-1996, when American League pitchers rarely batted, Brett's total of 12 at-bats (for the 1976 Chicago White Sox) was easily the single-season record. No other pitcher had more than 3 at bats in a season.

Ken faced his brother George 20 times in his career, giving up 6 hits, 2 doubles and an RBI. The two were briefly teammates with the Kansas City Royals in 1980 and 1981. Along with George and other brothers Bobby and J.B., Ken bought the Spokane Indians in 1985. They also purchased the Spokane Chiefs major junior hockey team, the Tri-City Dust Devils, and the High Desert Mavericks. Together, George and Ken appeared in a 1978 episode of Fantasy Island.