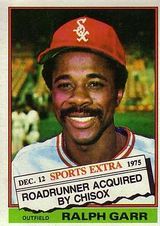 Nicknamed "Road Runner" due to his speed, outfielder Ralph Garr hit .306 over thirteen years in the majors and won the National League batting crown in 1974.

Garr played baseball and football at Grambling State University, hitting .582 in the regular season in 1966 to lead college baseball. He was selected by the Atlanta Braves in the third round of the 1967 amateur draft. He made his pro debut that summer with the Austin Braves and went on to lead the Texas League with 32 stolen bases. Two years later with the Richmond Braves, he led the International League with a .329 average and 63 steals, and in 1970, he was hitting .386 with 39 stolen bases when he reached the majors for good.

Garr was traded to the Chicago White Sox after the 1975 season and hit exactly .300 in his first two years there. He was the first hitter to bat against the Toronto Blue Jays, and ended his career with the California Angels.

Despite his speed, Garr was regarded as somewhat defensively challenged in the outfield.

Garr has worked in the Atlanta Braves scouting department since 1985. His son Ralph Garr Jr. followed him into both playing and scouting. In 2006, Ralph Sr. became a member of the Atlanta Braves Hall of Fame, and in 2008, he was elected to the International League Hall of Fame. Through 2009, he has the most hits of any MLB player from Grambling State (with no one else particularly close).