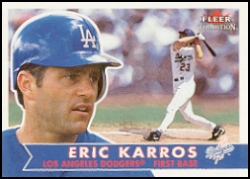 Eric Karros is the all-time home run leader for the Los Angeles Dodgers through 2011. Karros, an immensely popular player with the Dodgers, played fourteen years in the majors and hit 284 home runs. He was Rookie of the Year in 1992 and fifth in the National League in MVP voting in 1995. His Adjusted OPS+ was only 107, partly because his batting average and on-base percentage were relatively modest, and partly because the prime of his career was relatively short. In his best year however (1995), his Adjusted OPS+ of 145 was fourth best in the league. He played almost exclusively first base, with only 13 games at DH.

Karros attended UCLA, and his time there overlapped with that of Todd Zeile and Jeff Conine. Karros received a degree in economics, and said in an interview: "I went to college because of academics and then talked to the coach about playing baseball as a walk-on." His father had gone to Yale. Source: College Grads Rare in MLB. He was signed as a 6th round pick in the 1988 amateur draft by the Dodgers and scouts Gib Bodet and Bob Bishop. He was one of only a handful of players to hit 250 or more home runs and never make a big league All-Star team.

He is currently a commentator on FOX baseball broadcasts.