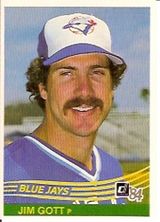 Jim Gott played fourteen years in the majors. Initially a starter, he was later moved to the bullpen and saved 91 games in his career,

A fourth round pick in the 1977 amateur draft by the St. Louis Cardinals, Gott was signed by Angel Figueroa. Following the 1981 season, he was selected by the Toronto Blue Jays in the 1981 Rule V Draft. He earned his first major league win on May 30, 1982, defeating the Baltimore Orioles in a combined one-hitter with Roy Lee Jackson on the first day of Cal Ripken's famous streak. He had a game ball from that first victory on his mantle for 13 years. On September 5, 1995, he presented that game ball to Ripken in a post-game ceremony at Camden Yards celebrating his 2,130th consecutive game played, tying Lou Gehrig's record.

Prior to the 1985 season, Gott was traded to the San Francisco Giants for Gary Lavelle. He started 26 games for the club that year and on May 12th, he hit a pair of home runs in a contest against the St. Louis Cardinals. He was moved to the bullpen the following year, and midway through the 1987 season, he was acquired by the Pittsburgh Pirates. He saved 34 games for the team in 1988 but committed a record-tying 3 balks in one inning against the New York Mets on August 6th. He was actually the second pitcher to be so charged in the majors that season, following Don Heinkel in may, in a year when umpires were instructed to crack down on pitchers not coming to a full stop while pitching from the stretch, and the number of balks called going through the roof as a result. This would not happen again for almost 35 years, until Richard Bleier was charged with three balks in one inning while pitching for the 2022 Miami Marlins. After severely injuring his elbow, he only appeared in 1 game for the Pirates in 1989.

Gott signed with the Los Angeles Dodgers following the 1989 season and spent five years with the club, recording 25 saves in 1993. He ended his career back with the Pirates in 1995.

Gott threw a 90 mph fastball, a nasty slider, and a curveball. The two most similar players through 2006, according to the similarity scores method, are Tom Hume and Neil Allen, two contemporary relievers who also spent time as starters.

Gott and Tim Teufel were linked in an odd way in the major leagues. "Gott" means "God" in German, while "Teufel" means "Devil" in the same language. Since Jim was a pitcher and Tim was a hitter, and they were mostly in the same league during their careers, that meant God faced the Devil regularly. Although Teufel hit a homer off Gott early on in their match-ups, overall God had more success than the Devil.

After his playing career ended, Gott worked as a co-host of Dodger Talk on the Dodger's radio broadcasts from 1996-1998 before disappearing from professional baseball. He resurfaced as a coach in 2011. Gott served as the pitching coach for the AZL Angels in 2011-2012 and spent 2013-2017 as the minor league pitching coordinator for the Los Angeles Angels of Anaheim. Gott moved up to the major leagues as the Philadelphia Phillies bullpen coach from 2018 to 2020. The Phillies did not renew his contract after the 2020 season.

In 2021 Gott worked with the MLB Draft League as a pitching coach for the Williamsport Crosscutters. He moved to the State College Spikes in 2022 in the same role.

He tutored Dennis Quaid for three months before Quaid's appearance in the movie "The Rookie"; he had been set up for the role by former Pirates teammate Bill Landrum, who had done other work in the movie industry.