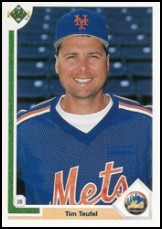 Tim Teufel played 11 seasons in the big leagues and hit well in the 1986 World Series. His son Shawn Teufel has pitched in the minors.

He was in the minors from 1980 to 1983, getting his chance at the majors when he hit .323 with 27 home runs for the Toledo Mud Hens in 1983. He made his major league debut that September and stayed with the Minnesota Twins through 1985. In 1984 he had 14 home runs for the Twins and was fourth in the Rookie of the Year voting.

He was traded to the New York Mets after the 1985 season, and spent 1986 through part of 1991 with the Mets. In his best major league season with the bat, he hit .308 with 14 home runs in 1987 for the Mets. Mainly, he was the righthanded platoon partner for second baseman Wally Backman, who was nominally a switch-hitter but was in fact pretty helpless against lefthanders.

At the end of May 1991 he was traded to the San Diego Padres and finished his major league career with the Padres from 1991 to 1993.

Teufel and Jim Gott were linked in an odd way in the major leagues. "Gott" means "God" in German, while "Teufel" means "Devil" in the same language. Since Jim was a pitcher and Tim was a hitter, and they were mostly in the same league during their careers, that meant God faced the Devil regularly. Although Teufel hit a homer off Gott early on in their match-ups, overall God had more success than the Devil.

After retiring, Teufel joined the Mets organization as a scout in 1998. In 2001 and 2002, he was their Minor League infield coordinator, and later managed a number of their farm teams. In 2012, he was named third base coach for the Mets and stayed until the end of the 2016 season. He was then named a minor league infield instructor and club ambassador.

An anagram for Tim Teufel is futile met.