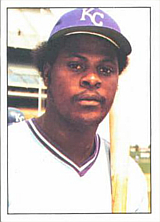 John Mayberry was a power-hitting first baseman for the Kansas City Royals and Toronto Blue Jays in the 1970s and early 1980s. His son, John Mayberry Jr., was a major league outfielder, reaching the bigs with the Philadelphia Phillies in 2009.

Mayberry was a first-round pick in the 1967 amateur draft, and came to the majors as an 18-year-old youngster with the 1968 Houston Astros. He became a regular after being traded to the Kansas City Royals before the 1972 season. In 1973 he led the American League in on-base percentage and in 1975 he was second in the MVP voting. That 1975 team featured a 22-year-old George Brett as well as 39-year-old Harmon Killebrew and 36-year-old Vada Pinson. At the end of spring training in 1978, his contract was sold to the Toronto Blue Jays in a stunning move. While the Royals wanted to make room for young phenom Clint Hurdle, the real reason behind the move were rumors of drug use by Mayberry. He continued to be a productive hitter for the Blue Jays from 1978 to 1981, hitting 30 home runs in 1980. He was traded to the New York Yankees mid-year in 1982. He was released by the Yankees towards the end of spring training in 1983, ending his playing career.

The similarity scores method shows the most similar players through 2012 as Andre Thornton, Jeff Burroughs, and Jason Thompson. His first baseball card appearance was on a 1970 Topps card.