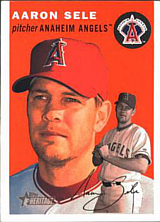 Aaron Sele was 1-1 with a 3.95 ERA for Team USA in the 1990 Baseball World Cup. He had the second-best ERA on a weak staff which cost the high-scoring US. He was with the US for a Bronze Medal in the 1990 Goodwill Games.

Sele was a reliable if unspectacular starting pitcher during a 15-year major league career that saw him pitch for six different teams. He won in double figures five consecutive seasons from 1997 to 2001, including 15 or more wins during the last four of those years. He was twice an All-Star, with the Texas Rangers in 1998, when he won a career-best 19 games, and with the Seattle Mariners in 2000, when he was 17-10, 4.51.

In 2011, Sele joined the Los Angeles Dodgers front office as Special Assistant, Baseball Operations and Player Development. He currently works for the Chicago Cubs as a special assignment scout.

He became eligible for election to the Hall of Fame in 2013 but received only one vote and was dropped from the ballot. There was some controversy about how an obvious non-Hall of Famer could receive a vote with such a loaded ballot competing for BBWAA members' attention, but Sele deflated the issue by stating: "I am surprised, and it also makes me feel that somebody out there respected the way I handled myself as a professional baseball player, that I had a lot of integrity. Obviously, the Hall of Fame, I understand I'm well short. About 152 wins short.