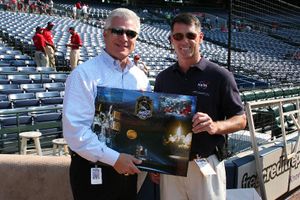 Wren (left) accepts a gift from a NASA astronaut

Frank Wren served as general manager of the Baltimore Orioles in 1999 and of the Atlanta Braves from 2007 to 2014. Previously, he had played five years in the minor leagues and was in the Florida Marlins front office for 8 years.

Wren then became general manager of the Jamestown Expos in 1985. He was promoted to Expos Assistant Scouting Director and in 1989, Director of Latin American Scouting and Operations. From 1991 to 1998, he was the Florida Marlins Vice President and Assistant General Manager. The Baltimore Orioles hired him as their General Manager in 1999, but after a rough year, he was fired along with manager Ray Miller. He was immediately hired by the Atlanta Braves as Vice President and Assistant General Manager for Player Personnel and held that role through the 2007 season.

On October 11, 2007 Wren was promoted to General Manager as former Braves GM John Schuerholz moved into the team president role. During his tenure the Braves saw the end of the long managerial reign of Bobby Cox and his replacement by Fredi Gonzalez in 2011. After a four-year absence, the Braves returned to the postseason in Cox's last year, 2010, but lost in the NLDS. They again made the postseason in 2012, but lost the Wild Card Game at home, and in 2013 were ousted in the NLDS by the Los Angeles Dodgers. The pressure was on for the team to move further in 2014, but instead they missed the postseason altogether. Wren paid the price when he was fired on September 22nd, the day after the Braves were mathematically eliminated. He was replaced on an interim basis by John Hart.

On September 25, 2015, he was hired by new Boston Red Sox team President Dave Dombrowski as Vice-President of baseball operations, a day after Mike Hazen had been hired to be the team's General Manager. Wren had a strong connection with Domnbrowski, who had been his boss in the Montreal Expos organization and whom he had followed to the Florida Marlins when that franchise got off the ground.

Wren's club, the Braves, drafted his son, Kyle Wren, in the eighth round of the 2013 amateur draft.