Note: This page discusses 1990s and 2000s relief pitcher Jeff Nelson. For the umpire of the same name, click here. 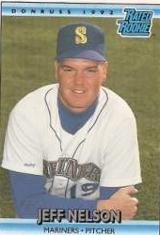 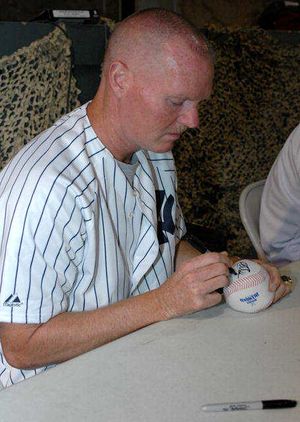 Nelson signs a baseball for a fan in 2008

Pitcher Jeff Nelson was signed by scout Bob Carter for the Los Angeles Dodgers as a 22nd round pick in the 1984 amateur draft.

Over a 15-year major league career, Nelson pitched three times for the Seattle Mariners and twice for the New York Yankees, rounding out his career with short stints with the Texas Rangers and Chicago White Sox. A right-hander standing 6' 8", he was noticeably more effective against right-handed batters than left-handers over his career, and was often used as the right-handed equivalent of a LOOGY. In style, he was almost a mirror image of Graeme Lloyd, a tall left-hander who pitched for the Yankees from 1996 to 1998. Nelson was a better pitcher however, making the All-Star Team in 2001 in his second stint with the Mariners. He was part of four World Championship teams with the Yankees from 1996 to 2000, and played again for them in the 2003 World Series, which they lost to the Florida Marlins.

Nelson played one game as an outfielder on July 15, 1993. After Nelson had retired two batters in the 8th inning of a game against the Boston Red Sox, manager Lou Piniella sent him to left field and asked left-hander Dennis Powell to come in to retire the next batter. Piniella then had Greg Litton pinch-hit for Powell in the top of the 9th. Nelson returned to the mound, got the first two outs in the 9th inning, and was then replaced by left-hander Mike Hampton who got the last out of the game.

He is the nephew of former minor leaguer Cole Nelson.