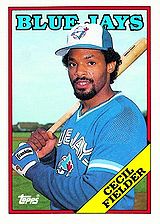 Cecil Fielder hit over 300 home runs in his career. He led the league twice in home runs and three times in RBI. He was second in the MVP voting twice.

While attending Nogales High School in California, he was a two-time California all-state baseball player. He also made all-state teams in football and basketball.

He returned to America in 1990, signing a contract with the Detroit Tigers. He had an outstanding season for the Tigers that year, slugging 51 home runs and becoming the first player in 13 years to hit more than 50. He finished second in the American League Most Valuable Player voting that season and again in 1991. In 1992, he became the first player in 71 seasons to lead the majors in RBI three years in a row. The last player to do it before him was Babe Ruth, who accomplished the feat in 1919-1921. Fielder spent six full seasons with the Tigers, and his performance declined slightly each year. Midway through the 1996 season, he was traded to the New York Yankees for Ruben Sierra. After a season and a half with the Yankees, Fielder signed with the Anaheim Angels prior to the 1998 season. He hit 17 home runs for them but was released in August. Soon afterwards, he signed with the Cleveland Indians but only hit .143 with them. After about a month, they released him, ending Cecil Fielder's big league career.

Quote: "Listed at 250 pounds but one must wonder what would happen if he put his other foot on the scale." -Bill James

When his son reached 30 homers for the Tigers in 2012, that made the Fielders the second father-son duo to both crack 30 home runs for the same franchise; Bobby Bonds and Barry Bonds had done so previously, for the San Francisco Giants. He also has the same amount of career home runs as his son, finishing his career with 319.

Post-baseball, he runs the Cecil Fielder Elite World Series [1] for children at various age levels. He also runs "The Baseball Legends" promoting young athletes in the US and Mexico.