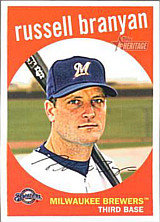 "I couldn't believe how far that kid hit that ball." - Jim Thome, talking about a home run Branyan blasted in spring training 1998 that bounced off a car.

Russell Branyan was a Three True Outcomes player, drawing a walk, hitting a homer or striking out in a shade over 50% (50.5%) of his career plate appearances. Of his 682 career hits in 14 seasons, 194 (28.4%) were home runs. In 2,934 plate appearances, he struck out 1,118 times or 38.1% of the times he went up to bat. Branyan saw time with 10 big league teams over 14 seasons. Of the 14, he appeared in more than 100 games only four times, while in five seasons he split time between two franchises. In 2009, he socked a career-best 31 homers in 116 games with the Seattle Mariners. Toward the beginning of his big league career, he was known as Russ Branyan.

In 2008, Branyan was arrested and charged with domestic violence after a dispute turned physical with his wife on their way home from dinner at a Bainbridge, OH restaurant. A temporary order of protection was granted for Jill Branyan and their two children prohibiting Russell from coming within 500 feet of them. In 2015, Branyan was charged with felony aggravated burglary after breaking into his now ex-wife's home and stealing several items while tampering with the house's thermostat.