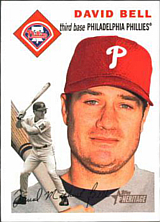 David Bell is the son of Buddy Bell and grandson of Gus Bell. His brother, Mike, played briefly with the Cincinnati Reds in 2000 and his nephew, Luke, Mike's son, was a 2019 draft pick.

After hitting .292 with 9 home runs and 60 RBI for the Canton-Akron Indians in 1993, David was the Cleveland Indians Minor League Player of the Year in 1994, batting .293 with 18 home runs and 88 RBI with the Triple A Charlotte Knights. With no room at the inn in Cleveland due to the presence of future Hall of Famers on the infield corners, David was flipped to the St. Louis Cardinals in June 1995 as part of a package for Ken Hill. His best seasons came with the Philadelphia Phillies in the 2000s, when he joined his grandfather as the the first grandpa/grandson duo to hit for the cycle, turning the feat June 28, 2004, against the Montreal Expos. In the 2002 World Series, it was Bell racing home for the San Francisco Giants when J.T. Snow made the daring rescue of Giants three-year-old bat boy Darren Baker from being mowed down. Bell's big league career ended after a 2006 season split between Philadelphia and the Milwaukee Brewers. His name was later brought up in the 2007 Mitchell Report as a possible user of steroids and Human Growth Hormone.

Entering the world of coaching, Bell managed the Carolina Mudcats from 2009 to 2011, then moved to the Louisville Bats in 2012. The Bats finished the 2012 season with a record of 51-93 (.354). He was named third base coach of the Chicago Cubs in 2013 then moved to the St. Louis Cardinals as assistant hitting coach in 2014 and was promoted to bench coach in 2015. He left following the 2017 season. In 2018, he served as farm director for the San Francisco Giants, and after the season he was in the running for various managerial openings. On October 21, 2018, the Reds announced that they had selected Bell to be their manager for 2019, replacing Jim Riggleman. He was the fourth major league manager to be the son of a major league manager, his father Buddy having previously managed three different teams.