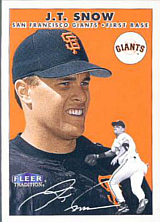 Snow was a switch-hitter until 1998, then reverted to his natural left-handed side for the rest of his career. He was part of the California Angels return from the New York Yankees in the deal that sent Jim Abbott to the Bronx.

Snow was involved in several memorable postseason moments with the San Francisco Giants. He hit a pinch-hit three-run home run off Armando Benitez in the bottom of the 9th to tie Game 2 of the 2000 NLDS between the Giants and New York Mets. He scooped up manager Dusty Baker's 3-year-old son (and batboy) Darren Baker while scoring on a Kenny Lofton base hit during Game 5 of the 2002 Fall Classic (a picture of which hangs in the Baseball Hall of Fame). And he was famously thrown out at the plate trying to score the tying run from second base on a Jeffrey Hammonds single to left to end the 2003 NLDS between the Giants and Florida Marlins. Jeff Conine made the throw and Ivan Rodriguez held on to the ball after a collision to complete the play and the series.

Snow was released by the Red Sox after playing in 38 games in 2006. On September 24, 2008, the Giants signed him. On September 27th, he was in the starting line-up, batting fifth and playing first base. Before the leadoff hitter for the opposing Los Angeles Dodgers completed his at bat, Snow was replaced with Travis Ishikawa, and his professional career was over.

In his first year of eligibility for the Hall of Fame in 2014, he received only 2 votes (0.4%) and dropped off the ballot.

Snow worked for ESPN announcing games of the 2018 CWS Regionals in Corvallis, OR.