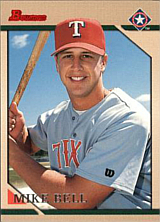 Mike Bell, who played 19 big league games in 2000, played 14 years in the minors, accumulating over 4,500 at-bats. He was a third baseman most of his career, playing a fair amount of second base as well. He played in eight different organizations. Mike is the son of Buddy Bell, brother of David Bell, and grandson of Gus Bell. He is the father of Luke Bell, who was a 34th round pick in the 2019 amateur draft. Barry Larkin and Norm Charlton played with both Mike and Buddy.

Following several years as a manager in their chain, Mike worked his way up to Director of Player Development for the Arizona Diamondbacks. In 2020, he joined the Minnesota Twins as bench coach for manager Rocco Baldelli.