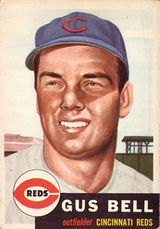 Gus Bell had a 15-year career in the majors, mostly with the Cincinnati Redlegs. He hit 206 home runs and had a .281 batting average. During his career, he was consistently one of the better hitters on his teams but never the most prominent, being overshadowed by Ralph Kiner, Ted Kluszewski, and Frank Robinson.

Nicknamed "Gus" in honor of big league catcher Gus Mancuso, Bell was signed by the Pittsburgh Pirates and made his pro debut in 1947. After hitting .400 in 38 games for the Indianapolis Indians in 1950, he was called up to the majors. He was soon seeing regular playing time in the outfield and hit .282 with 53 RBI as a rookie. The following summer, 1951, he led the National League with 12 triples and hit for the cycle in a June 12th game. After a brief stint back in the minors with the Hollywood Stars in 1952, he was back in the big leagues in May.

Following the 1952 campaign, Bell was traded to the Cincinnati Reds for three players. Bell would hit 24 home runs against the Pirates, the most by a former Pirate until Moises Alou passed him decades later. Over the course of the next five years, he was a consistent fixture in the outfield, hitting between .292 and .308 each year. In four of those seasons, he was an All-Star, and three times during that stretch, he drove in more than 100 runs. He had his best year in 1953, hitting .300 with 30 home runs and a team-leading 37 doubles. On July 21, 1955, he clubbed three homes in a game, and on September 21st of that year, he drove in 8 runs. He ended his time with the Reds by appearing in 3 games of the 1961 World Series. Bell was one of the original New York Mets after being selected in the 1962 expansion draft. He got the team's first-ever hit on Opening Day 1962, but batted just .149 in 30 games for the club. In May, he was dealt to the Milwaukee Braves, and he retired two years later.

Bell was the father of All-Star third baseman Buddy Bell. He died of a heart attack at age 66 in 1995, just a few days after his grandson, David Bell, made the majors. Another grandson, Mike Bell, later briefly played in the big leagues and Mike's son, great-grandson Luke Bell, was drafted in 2019.