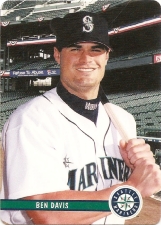 Ben Davis played seven seasons in the major leagues primarily as a catcher, accumulating over 1,500 at-bats. After his last big league game in 2004 Davis continued to play minor league and independent ball. He started pitching regularly in the independent leagues in 2008 and in 2009 pitched for the Sarasota Reds in the Cincinnati Reds organization. Davis compiled an ERA of 3.09 over 11.2 innings, totaling 14 strikeouts with only 2 walks. Davis wrapped up his playing career in 2010 as he went 5-11 with a 4.61 ERA for the Camden Riversharks of the Atlantic League.

Davis was named the Best Defensive Player in the 1994 World Junior Championship. He hit .313 to help the US win Bronze.

He is the brother of Glenn M. Davis who was the Los Angeles Dodgers top pick in 1997, but never made it to the majors.

Davis was at the center of a controversy for breaking an unwritten rule on May 26, 2001. Davis, then with the San Diego Padres, dropped down a bunt single in the eighth inning against the Arizona Diamondback pitcher Curt Schilling to break up a no-hit bid. After the game Diamondbacks manager Bob Brenly called Davis' move "chicken". Padres manager Bruce Bochy disagreed, noting at the time the Padres trailed by only a 2-0 score and Davis was trying to help the team win the game.