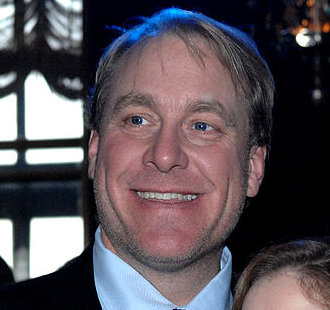 Curt Schilling was one of the most prominent pitchers in major league baseball in the 1990s and 2000s. He notched his 3,000th strikeout in 2006. He was also one of the few major league ballplayers who spoke out against the use of steroids at time when usage was common.

He was the first Alaska native to become a major league pitcher.

Schilling was drafted by the Boston Red Sox in the second round of the January 1986 amateur draft. In 1988, he was traded at the deadline to the Baltimore Orioles and he made his major league debut later that season.

With Baltimore, Schilling often shuttled between the big club and their AAA team the Rochester Red Wings. In 1989, he led the International League in wins (13), starts (27), complete games (9), shutouts (3), and innings (185 1/3). This earned him a brief call-up that year but he was back splitting time between AAA and the Show in 1990.

Schlling was shipped to the Houston Astros during the winter of 1991 along with Pete Harnisch and Steve Finley in return for Glenn Davis, in a trade that turned out to be horribly one-sided in favor of the Astros. Schilling lasted one season in Houston, again splitting time between the major leagues and the minors, before being dealt again to the Philadelphia Phillies before the 1992 season. After the Phillies were beset by pitching injuries, they returned Schilling to the starting rotation. He flourished winning 14 games. His 2.35 ERA was good for fourth in the National League.

The following season, 1993, it all came together for Schilling and the Phillies. Schilling went 16-7 as a full-time starter. He was the staff ace as the Phillies went all the way to the World Series. Schilling was named NLCS MVP in the Phils' upset victory over the Atlanta Braves. He is also remembered for covering his head with a towel when closer Mitch Williams would enter the game, afraid that the man known as "Wild Thing" would blow the game in his out-of-control style.

Entering the 2000 season, it was clear that Schilling was not in the plans of the rebuilding Phillies. After a half season of pandering by management and entreaties from many franchises, the Arizona Diamondbacks won the Schilling sweepstakes and he was dealt for four players at the trading deadline. As the righthanded complement to Randy Johnson, Schilling led the National League in wins in 2001. In the post-season, Schilling was masterful: he won 4 games, including one in the World Series. He had an ERA of 1.69 in the Series and was named co-MVP with Johnson.

Johnson and Schilling combined for 47 wins in 2002 and they finished 1-2 in the voting for the Cy Young Award. They did not fare well in the playoffs, however losing to the St. Louis Cardinals in the NLDS. Schilling, however, was masterful with a 1.29 ERA in his only start. During the regular season, he had a streak of 56 strikeouts between issuing walks, from May 13th to June 8th; it was the longest such streak recorded since the current pitching distance was moved 60' 6" in 1893, and likely the longest of all time, as extreme K/W ratios such as Schilling's are a relatively recent phenomenon. The record was tied by Gerrit Cole in May of 2021, and broken by Corbin Burnes a couple of days later. He followed that with a pedestrian season in 2003, going 8-9 with a stint on the disabled list. 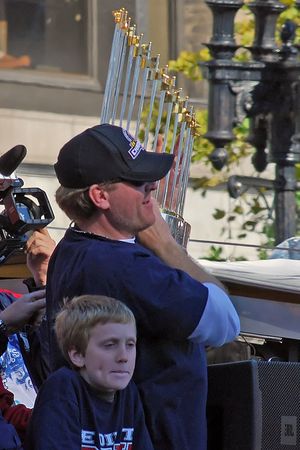 Schilling and the World Series trophy

Schilling's enduring legacy was cemented when he signed with the Boston Red Sox for the 2004 season. At age 37, he was named an All-Star for the sixth time. He led the American League in wins (21) and was second in ERA (3.26). The Schilling of old had returned for an encore. As the Red Sox entered the playoffs, Schilling was the staff ace. In the first game of the Division Series, Schilling tore the tendon sheath in his right ankle. The injury was originally thought to be a relapse of a bone bruise suffered earlier in the season, or a case of tendinitis. As the pain increased, Schilling was eventually forced to undergo a minor surgical procedure the day before he pitched. The torn tendon sheath was stitched into place so it wouldn't interfere with the joint, then released after the game. Pitching in pain, and with blood soaking through his sock, Schilling won Game 6 of the ALCS against the hated New York Yankees. The Red Sox had been behind, three games to none. With Schilling, they forced a seventh game, which they won, making it the first time a team had overcome a 3-0 deficit in baseball history.

In the World Series, Schilling gave the Red Sox six shutout innings in Game 2 during a sweep of the St. Louis Cardinals. During the winter, he had major surgery to repair the ankle. The injury impaired him into the 2005 season, as he only made 11 starts.

After his retirement, Schilling invested in starting a video game company named 38 Studios, although that venture was not a great success. He had to put up $5 million in gold coins as collateral to secure a loan that allowed its first game to go on the market in 2012, and then laid off the company's entire staff as soon as that milestone was reached. On November 1st, the Rhode Island Economic Development Corporation sued him and other top officials from 38 Studios over a $75 million loan guarantee to his defunct company. He had put up a key piece of memorabilia, the blood-stained sock he wore in Game 2 of the 2004 World Series and which had been on loan to the Hall of Fame ever since (the sock he had worn in Game 6 of the ALCS had been thrown away after the game, as no one yet realized its future iconic nature). The bank seized the artifact and auctioned it off on February 23, 2013; it fetched $92,613 from an anonymous bidder. On September 19, 2016, Schilling and other officials from 38 Studios agreed to pay $2.5 million to the Rhode Island Economic Development Corporation in order to put an end to the lawsuit. That settlement left Rhode Island taxpayers on the hook for the remaining $28.2 million lost in the failed venture.

In his first year of eligibility for the Hall of Fame in 2013, he made a solid debut, obtaining 38.8% of the vote. He benefited from his uncompromising stand against steroids on what was dubbed the "steroid ballot", finishing ahead of Roger Clemens, whose career numbers were better, but who carried the taint of PED use. That strong opening total made him a candidate to watch in future ballots. However, in 2014, he fell back significantly, to 29.2%, well behind Clemens. While almost all holdovers on the ballot regressed because of a strong first-year class, he suffered a lot because of the presence of two 300-game winners among the first timers, Greg Maddux and Tom Glavine, who were both elected on their first try. With other top-rank pitchers such as Pedro Martinez and Randy Johnson about to join the ballot, he faced a long road to gain election. Indeed, three more pitchers were elected on their first try in the 2015 vote - Johnson, Martinez and John Smoltz - but Schilling also saw his vote total improve to 39.2%, indicating that now that a bunch of clearly superior pitchers were out of the way, his case would be given closer consideration in future years. He did indeed make a significant jump forward in 2016, all the way to 52.3%, but in 2017, he fell back to 45% while all other candidates moved up, an indication that his controversial beliefs had tarnished his candidacy. He bounced back to 51.2% in 2018, but had clearly lost momentum, with Mike Mussina now the pitcher best-placed to receive the BBWAA's nod in future years. Mussina was indeed elected in 2019, but Schilling had the highest vote total among those missing the cut, with 60.9% bringing him on the threshold of election if he managed to keep his outrageous statements in check for another year. In 2020, he came within 5% of election, with an even 70% of the vote. It was the highest total for someone who was not elected that year and automatically made him the favorite to be voted in in a year's time, with a weak first-year class unlikely to detract from his candidacy. However, he again failed to gain election in 2021 in spite of the path being wide open for him, obtaining 71.1% of the vote, and he had only himself to blame as he had been incapable of not running his mouth constantly on social media. Schilling stated after the results of the vote were announced that he wanted his name to be removed from the ballot for his final year of eligibility in 2022, as he had nothing but contempt for members of the BBWAA. His request had no obvious effect, but in his final year, he dropped to 58.6% after he had doubled down on the offensive comments during the year.

In February of 2014, Schilling announced that he was fighting cancer. He had found an abnormal bump on the side of his neck, and after he got it checked by a doctor, it was found that he was suffering from squamous cell carcinoma, a form of cancer almost certainly caused by chewing tobacco. Schilling had been a user for 30 years and became a self-proclaimed addict, to the point of losing his sense of taste and suffering repeatedly from bleeding gums. He stated in June that the cancer was in remission. In 2015, he was working as a part-time analyst for ESPN when he was suspended after making an ill-advised tweet comparing Muslims and Nazi Germany. It was not the first time he had expressed controversial political opinions as he had previously ranted against the theory of Evolution and loudly proclaimed his allegiance to the Republican Party, to the point where he was claiming his political views were keeping him out of the Hall of Fame. He was not tamed by the suspension, as more controversial public pronouncements followed over the off-season and early in 2016. ESPN finally had enough on April 20, 2016 when it announced Schilling's firing after another public tirade, this time over transgender people's rights to access appropriate bathroom facilities. The network's statement read: "ESPN is an inclusive company. Curt Schilling has been advised that his conduct was unacceptable and his employment with ESPN has been terminated.”

Not surprisingly, he came out as a supporter of Donald Trump in the 2016 Presidential election and announced at the time his intention to seek political office himself, including running for President after eight years ... or four "if by some amazing illegal event" Hillary Clinton were to win the election. The President then paid him back by tweeting in support of his candidacy for the Hall of Fame a couple of days before the announcement of the results of the 2019 Hall of Fame Election, one of Trump's rare comments on happenings in baseball. He was one of the hard liners refusing to recognize Trump's defeat in the 2020 Elections, and even sent messages in support of the attempted take-over of the Capitol by fanatical supporters who sought to prevent certification of the election's results. Dan Shaughnessy wrote "Curt Schilling would help himself if he'd stop spewing hate and claiming he's being punished by Baseball Hall of Fame voters because of his 'politics.' Supporting a racist mob that stormed the Capitol is not being 'political.' Advocating for lynching journalists, calling Adam Jones a liar when he said he heard racist slurs at Fenway Park, bilking Rhode Island out of $75 million, collecting Nazi memorabilia, and posting anti-transgender material...these are not 'political' stands."